SCIENTISTS in Almería have created an environmentally-friendly superbug to protect salad crops grown under plastic.

In a bid to reduce the use of chemical pesticides, the team from Almería University has made a genetically-modified ladybird specifically designed for invernaderos (plastic greenhouses). 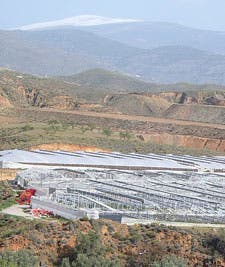 “What we have managed to create is a natural enemy for pests that attack salad crops such as tomatoes and green peppers,” team leader Tomás Cabello said.

Currently, only a quarter of farmers throughout Almería use natural methods to protect what they grow in plastic greenhouses.

Many spray their crops with chemicals to kill of plagues such as red spider mites and a species of white fly that is only found in greenhouses (Trialeurodes vaporariorium).

The superbug, which is currently being tested in greenhouses around Almería, has been given the name Nabicontrol. With its supposed voracious appetite, it is expected to become commercially available later this year.

Around 50,000 hectares of the Almería province is under plastic, as farmers grow crops such as strawberries, tomatoes and cucumbers year round – often for supermarket shelves in the north of Europe.

As our photograph above shows, gusts of up to 70 kilometres per hour tore the plastic covering from the invernaderos to reveal crops of fruit and vegetables inside.

An Olive Press reader who took the photograph said: “We had a giant wind that swept everything up – including plastic from the greenhouses.

“I had to send this picture to you following your plastic bag campaign as these farmers are not renowned for picking up after themselves.”

As reported in issue 35, toxic residue from invernaderos is often not disposed of correctly and is sometimes burned in dry riverbeds or dumped into the sea.