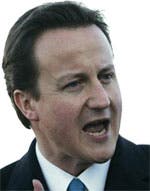 EXCLUSIVE – By Jon Clarke in Ronda

IT is anything but the Barbados home of some A-list celebrity or the private island of one of his Italian political chums.

Unlike Tony Blair, for David ‘Dave’ Cameron a week in southern Spain is all you need to recharge your batteries.

Fresh from the good news of his by-election result in Crewe the Conservative leader and his family hot-footed it to the sun – well rain, in fact – of Andalucia.

Keeping a low profile and avoiding the attentions of the paparazzi, he checked into a popular family hotel in the mountain town of Ronda and did what most ordinary families do.

“He told me he had been out walking, cycling and horse riding with the family,” said Paul Derwent, who was stunned when he walked into his bar Allioli, in Jimera de Libar.

“He said he had really enjoyed the fresh air and mountains, which is just as well as the weather has been awful.”

The politician had turned up with wife Samantha after undertaking a stiff three-hour hike, known as the Walk of Mr Henderson’s Railway, which involves jumping on the local train on the return leg.

It is understood his three children – Ivan, 5, Nancy, 4, and Elwen, 1 – stayed with a nanny at their hotel.

“He sat down and had a bottle of water and a couple of coffees,” said the Sheffield-born businessman.

“I had no idea who he was, until someone in my bar told me he was famous but didn’t know why.

“One of the regulars Pablo thought he was a pop star.

“Eventually I went up to him and asked him: ‘are you famous?’ and he replied: ‘A little bit, I suppose’, before telling me who he was.

“We had a good chat and I almost persuaded him to stick around for our village fiesta, but he said he had to go.

“What I couldn’t believe was that he was not with any security guards or any hangers on. He really is more down to earth than you would imagine.

“He was even happy to pose for a photograph for the Olive Press and took a copy for the train ride home.” 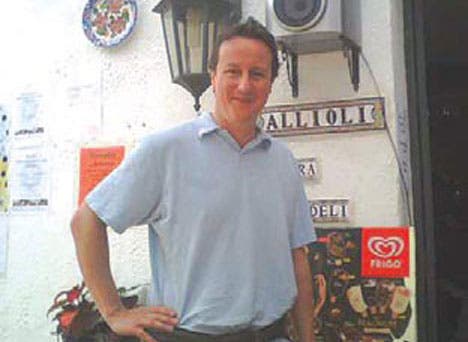 It was certainly the most low key of holidays with Cameron renting bikes and hiring horses to take trips up into the nearby hills.

Hiring two horses for an hour from local stable run by Santiago Sanchez in Zahara de la Sierra, he took off with Samantha into the nearby hills.

“He took a Spanish stallion, while she took a part Arabic horse,” revealed Sanchez. “They were both good riders, but because they didn’t speak Spanish and I don’t speak English we didn’t have much to say.”

They left him a four euro tip on top of the 36 euro charge, with Sanchez none the wiser about who they were. “I had no idea who they were until someone told me later in town,” he said.

After the ride the pair met up with their children and took lunch in a typical local restaurant in the historic town of Zahara.

Here, while having lunch, he was recognised by a group of single parent families on a special trip from the UK.

Organiser Elaine Love, who runs nearby Molino del Puente hotel, had taken the group out for a canoeing trip on the lake, when they arrived in the same restaurant.

The group that comprised a dozen children with their mothers (and one father) recognised Cameron straight away.

Said Love: “I went over and said it would make their holiday if they could get a photo with him and he was more than happy to oblige.

“He seemed very cheerful and upbeat, and was only upset about the bad weather.”

Cameron was staying in Ronda’s Fuente de la Higuera hotel, where numerous bullfighters such as Cayetano Rivera and actors such as Adrian Brody have stayed.

He is also understood to have visited his close friend and advisor Zac Goldsmith, who has a huge palatial home half an hour away in Benahavis.