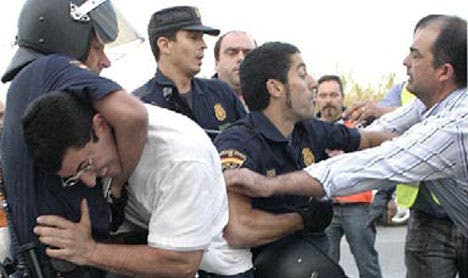 A TRUCK strike over soaring fuel bills has led to the death of a Spanish picket.

Julio Cervilla Soto, 47, was run over on a picket line at a market in Atarfe, Granada on Tuesday.

The Granada man was knocked to the ground after trying to stop a fellow van driver, who was later arrested near the scene.

Another striker meanwhile was killed in Portugal, while truckers in both countries have vowed to continue the strike indefinitely until fuel prices are lowered.

The action threatens to bring the country to a standstill this week as tens of thousands of lorry drivers began a protest on Monday that saw the nation’s ports and borders blockaded in a bid to disrupt supply routes.

“We are the ones who move the goods that this country needs to keep working. If we stop because we haven’t got the money to buy fuel then the country will stop,” said Julio Villascusa, president of the transport association federation Fenadismer.

Panic buying around Andalucia caused a number of petrol stations to run out of fuel on Monday.

Spain’s car industry came to a virtual standstill by Wednesday because of the strike.

Interior Minister Alfredo Perez Rubalcaba said police had arrested at least 51 protesters since the strike began on Monday, 34 of them for blocking the main motorway from Madrid to the north.

Police have so far escorted almost 3,000 trucks carrying food, fuel and medical supplies to their destinations, and Rubalcaba told distributors to call police if they needed protection to move goods by road

The areas that first ran out of petrol included Rincón de la Victoria and Vélez-Málaga in the Axarquia region of Malaga where petrol stations ran dry.

There were also shortages in Ronda and San Pedro, where a BP garage shut at 4pm.

Pauline Olivera, from El Gastor, had been next in line when the pumps were shut.

“I queued for around 20 minutes with around a dozen other cars for the last pump working. And just as I got to the front of the queue it ran out.

“I was very lucky to be able to have made it to Ronda, where there was still a petrol station open.”

More than 90,000 drivers have been summoned to take part in the strike after the union rejected a package of measures put together by the Ministry of Development to help deal with record fuel prices which have risen 20 per cent over the last year.

Hauliers warned that with almost no movement of trucks it would be a matter of days before petrol stations ran dry and supermarket shelves emptied.

Within hours of the strike being called on Sunday queues began to form at petrol pumps as Spaniards rushed to buy fuel and supermarkets reported a surge in customers stockpiling goods.

Long lines of traffic formed at Spanish-French border crossings and television stations showed pictures of abandoned lorries with broken windscreens, lights ripped out and tyres punctured after they were attacked for attempting to defy the strike.

The strike could also cause chaos for thousands of British holidaymakers heading to the Spain this week as truckers form so-called “snail protests” snarling traffic on ring roads around Madrid and Barcelona.

The transport strike comes as a fishermen’s strike across Spain protesting fuel costs entered a second week. Smaller boats that fish closer to the coast had now joined the protest which began on May 30.