THE Olive Press has been handed an award for its environmental campaigning.

The paper was singled out by Green group Ecologistas en Accion in Priego de Cordoba for its consistent reporting on issues affecting the environment.

In particular, it singled out the paper’s plastic bag and walking campaigns, as well as its “fearless” reporting on the controversial Los Merinos golf course case in Ronda.

Presenting the award inside Priego’s castle during the town’s annual festival, Ecologistas en Accion spokesman Pepe Reyes, said: “The Olive Press has fast become one of the very few truly responsible papers when it comes to the environment.

“Independent and fearless, it has consistently reported on corruption and illegal construction over the last few years. 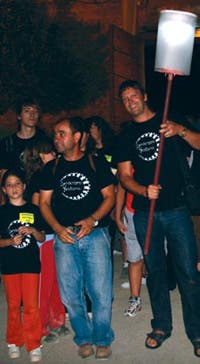 Accepting the award, alongside Subbetica National Park director Baldomero Moreno, Olive Press editor Jon Clarke told 200 locals that he felt that the paper was having a positive effect on not just the expatriate community but also the local Spaniards.

In Spanish, he explained: “With 30,000 papers going out around Andalucia every month we are finally getting the message out that it is essential to protect both our water and environment.

“Andalucia is one of the most beautiful places in the world and it is vital that it is not ruined by developers and corrupt mayors.”

Clarke was then given the honour of lighting the beacon to lead the town’s annual nocturnal walk in defence of the area’s green spaces.

The walk, which followed a route through the nearby park until dawn, is now in its 14th year.