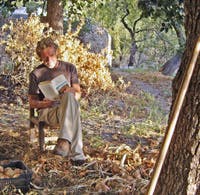 “Gerald who?” Asked BOB MADDOX when he moved to Yegen. But he soon discovered as the ghost of the English author still roams the streets of this mountain village

NOW, before you ask, as so many others have, no, I did not come to live in Yegen as a result of reading South from Granada. In fact, it was the village which led me to the book and the first time I heard the name ‘Gerald Brenan’ was from the lips of a Spanish estate agent. Shame on me.
Having spent my formative years at Harss End Secondary Modern School for Boys, my literary education was pretty well limited to a thorough knowledge of the Beano and a smattering of DH Lawrence (page 126 of Lady Chatterley’s Lover).
So, I first arrived in Yegen, blissfully unaware of its literary heritage or that the house I was aspiring to purchase overlooked the garden where a famous English author once mused. We were in the hands that fine July morning back in 2004 of one Francisco, a waiter from a neighbouring village who had recently taken to posing as an estate agent.
As we threaded our way down the steep lane that connects Yegen to the world at large, a small round man smiled at us from inside the courtyard of a grand, if slightly crumbling house. Francisco gestured as we passed. “Casa Gerald Brenan,” he said. “Don Geraldo, the famous English writer. His house. Virginia Woolf. You know.”

One thing which Harss End did endow me with was a remarkable sense of inferiority, which was now suddenly prodded into resentfulness by this Spanish village estate agent with his knowledge of the more obscure backwaters of English literature.
I looked to my wife Belinda (who went to a Grammar School and therefore reads more than I do) for help. “Who?” she mouthed silently, shrugging.
Not wishing to appear a fool, I decided to bluff it out and therefore leave no doubt. “Ah! So Gerald Brenan lives here!” I turned to Belinda. “Maybe we will get to know him.”
“Eventually perhaps,” said Francisco, and pointed. On the side of the house, an ornate blue and white ceramic plaque glittered in the sunlight as we passed. It read: EN ESTA CASA VIVIO POR SIETE ANOS (1920-1934) HISPANISTA BRITANICO GERALD BRENAN.
We might, it seemed, be a little late.

Four years later, I have finally read the book and, more importantly, had the privilege of knowing Emilio Pelegrina Flores and his wife, Eduarda Munoz del Rio, the current owner of Casa Brenan.
The house which Belinda and I bought that fine July morning turned out to be in a rather strategic position Brenan-wise. In addition to the holes which served as kitchen and bedroom windows and directly overlooked Brenan’s garden to the rear, our front door opened onto one of Brenan’s regular walks. Now marked as the Sendero local Ruta de Gerald Brenan, this attracts tourists, many of whom seem unable to read or to follow the little green and white stripes that mark out the path and so end up knocking on our door.
“Where is Gerald Brenan’s route?” “Is this Gerald Brenan’s house?” “Where is it then?” “Can I come in and look around anyway?” and “Who are you then?” are just a few of the questions I have been asked over the years, usually by people bobbing and weaving in an attempt to peer past me and into the house.
An assortment of nationalities have called on us over the years – Dutch, German, French, Spanish and even Americans – all aware of Gerald Brenan and his work.
On one occasion I opened the door on a troop of smiling Japanese, who took copious photographs of me; on another, an entire Dutch television crew.
But not once have my interrogators been English. Just why Brenan remains so neglected in the country of his birth is a mystery to me. Surely they cannot all have gone to Harss End Secondary Modern for Boys? I would have noticed.

On our third day in Yegen, we were cooking breakfast when the kitchen suddenly went dark. There, jammed into the metre-deep tunnel of the kitchen window and completely eclipsing the light, was the small round man who smiled at us that first morning in Yegen. This was Emilio Pelegrina Flores and he was there to welcome us with gifts of vegetables – grown in the very garden which Brenan had made famous.
Emilio was to become a familiar sight in the garden and a regular visitor to the kitchen window, where he would jam himself, snug as a torpedo in its tube and dispense news and invitations.

One crisp February morning, Emilio’s kitchen eclipse heralded an invitation into his garden to harvest kakis (persimmon fruit) from his two trees. These trees Emilio assured me, were the very ones which Don Geraldo himself had written of. “There would also be several hundred persimmons from two trees that grew in the garden: picked after the first frost, they ripened slowly and were eaten with a spoon when they went soft and squashy.”
Those on Emilio’s trees that morning had long since been kissed by the first frost and were already soft and squashy – a sign that Yegen was changing its preferences when it came to fruit.
Emilio trained me in the use of a clever little wooden turret tied atop a long pole. Snag a persimmon, twist sharply… and the fruit would drop neatly into the turret. At least, that is what happened when Emilio did it. Most of mine ended up smeared around the inside of the turret or spattered across the ground. 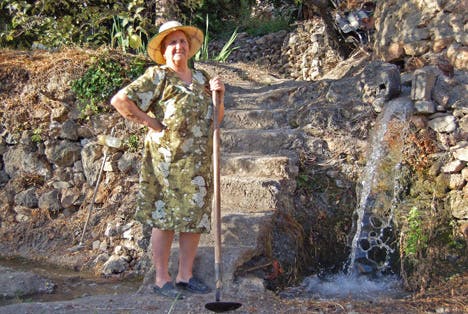 Eduarda takes a break from tending her garden

Emilio is gone now, taken suddenly by a heart attack in 2006, but wife Eduarda and daughter Conchi still work that same garden.
Both persimmons are still there and in rude good health, offering shade and fruit, just as they did in Brenan’s time.
Eduarda showed me round recently. “That is where he sat to do his reading,” she told me, pointing to an old skeleton of a wooden chair, sagging beneath the shade of the largest of the two persimmons.
I had to ask. “Is that… the same chair used by Brenan?”
Eduarda turned to eye me in surprise. “Are you loco Berto? That one went on the fire long ago.”
Well, I am sure you would have asked as well, just in case. But original or not, I could not resist sitting on it for a while, in the shadow of that same persimmon.

As for the rest of the house, it seems remarkably unchanged since Don Geraldo astonished the literary and artistic illuminati of Bloomsbury with the raw reality of Yegen. Of course, there are superficial changes, but Brenan would undoubtedly still recognise his old casa today.
The courtyard in which Aunt Rosario worked and Uncle Maximiliano turned the air blue with obscenities is still there; its steps still lead up to Brenan’s old room.
Over in one corner, the storeroom he occasionally sat in to read and write still holds essentially the same provisions as he described back then.
The same stone steps still lead down from it into a garden which itself has changed very little.
And that bench, just there inside the courtyard door, Eduarda assures me, is the one which he used often, just to sit and watch the village go by.
One fundamental change of course, has been in the arena of waste disposal.
The old toilet or ‘jakes,’ which led off the kitchen and which Brenan mystifyingly described as “..a poetical place” has gone. “Its seat was of fine-veined marble,” he wrote, “and its aperture gave way through an airy drop on to an enclosed corral twenty feet below.’
I often wonder just how poetical Virginia Woolf found that same experience during her stay in Casa Brenan.

Today, Yegen seems oddly reluctant to capitalise on its famous guest. The little tourist information booth at the eastern entrance to the village offers visitors faded photographs and maps of the Ruta de Gerald Brenan.
Eduarda herself still receives visits from Brenan aficionados anxious to see a little more than that blue and white commemorative plaque.
What so many people do miss is the pleasant little collection of Brenan memorabilia on display in the comedor of Bar La Fuente.
Next time you are in Yegen, call in and ask Eduardo or Marie Carmen, La Fuente’s owners, to show it to you. Tell them Roberto from the Olive Press sent you.
Rumours also abound of an official Brenan Museum some time in the future. Time will tell.

In the meantime, water still pours into the granite trough under the fountain where Brenan outraged village women by carrying his own water.
The olive mills he described are still standing; barely. The stream which once turned their wheels still flows, offering Mercedes, Yegen’s venerable matriarch, a place to wash her clothes, just as it always did.
And Eduarda still irrigates and tends the same garden, occasionally resting beneath the shade of those same persimmons.

Has Yegen itself changed? Of course – it is after all a living village, not a museum piece.
The concrete mixers have done their work here, as elsewhere across la Alpujarra. But, just as the changes to Casa Brenan are essentially superficial, so to my mind are these wider changes to the village itself.
Beyond the house and its garden, the fountain, the old mills with their stream and a few other survivors, Brenan would probably not recognise the structure of today’s Yegen.
But he would recognise its soul; its people, its traditions. The real Yegen.

Sometimes, in the early hours when sleep fails, I sit and gaze out over that same landscape which transfixed Brenan – over a black airy void where today, the spangles of night-lit villages set against the deeper blackness of the Sierra de Gador and Contraviesa ranges blend imperceptibly into a star-lit sky.
And just occasionally in that stillness, time telescopes in on itself and its possible to believe once again that the hechiceras and the warlocks are still out there, somewhere.

Has Yegen changed? Of course. Does it still have the power to captivate? You bet!