Could ‘sustainable’ 24-lane superhighway now be favoured over a tunnel? 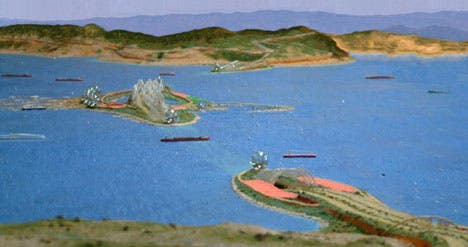 A BRIDGE across the Straits of Gibraltar could have just come a step nearer after a viability study for a tunnel came back negative.

The bridge scheme, which would go from Tarifa to Tangier, would involve nine miles of bridges 24 lanes wide, all connected to a floating island.

In good news for environmentalists a full geological study for a tunnel shows that two clay sections under the sea would make it difficult to build.

Angel Aparicio, boss of the group SECEG, the engineering group in charge of the project, admitted: “It is not clear whether it will be possible.

“Until we start building it is going to be very hard to know what to expect.”

The company is now proposing to build an exploratory tunnel from the Moroccan side up to the clay section in order to carry out tests.

“This would be better on environmental grounds and will give us a better idea of what the geology is like below the sea,” added Aparcio.

But this would also add an extra billion euros to the already huge projected cost of 3.4billion euros.

It has led the authorities to once again look at a bridge scheme, that was commissioned by the Junta two years ago.

Designed by US architect Eugene Tsui, the seven billion euro superhighway would be used by trains, cars and pedestrians to transport around 60 million people a year.

The 14.5km bridge would be submerged in two parts and linked up by a floating ‘ecological island’.

The design allows for the largest ocean-going ships to pass unimpeded within a four mile width where the bridge is submerged and leaves marine currents undisturbed.

Financed by Spain, Morocco and the European Union, it would take seven years to complete and would link the towns of Punta Cires in Morocco with Tarifa in Spain.

In a clever add on, the three-mile long island will be an energy production centre with 150 windmills and 80 underwater tidal turbines generating 12 billion kilowatts of electricity an hour. ‘This in itself allows the bridge to pay for itself many times over in the generation of electricity, not to mention tourist dollars,’ Tsui told the Olive Press.Launched in 2006, it would also create less damage on the fragile ecology around Tarifa.

Currently, the longest existing bridge is the Seto Ohashi Kojima bridge some 13.22 kilometres long and built in 1988 for $8.3 billion dollars

A source at the Junta told the Olive Press: ‘We are taking this seriously. The environmental aspects of the scheme are of particular interest, as is the fact that it would pay for its way.” 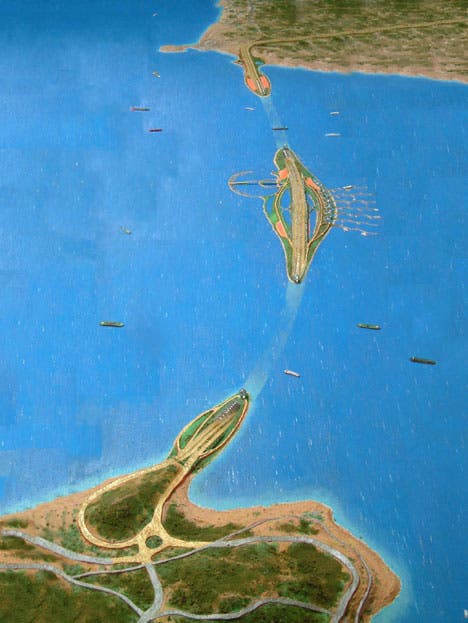