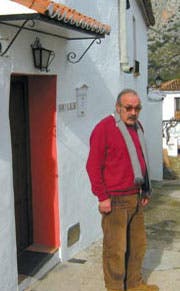 TENS OF THOUSANDS of British pensioners living in Spain are in danger of falling into penury.

Trapped by rising prices, a property market that has completely collapsed and a pound that has plummeted almost 30 per cent against the euro many are on the verge of being forced home to the UK.

With the two currencies nearly at an unprecedented one-to-one parity, it means that those surviving on state pensions have seen their monthly payments fall by over a hundred euros.

Private pensions are similarly affected by the falling pound, while those who support themselves from the income on their savings have been hit by swingeing interest-rate cuts.

While a year ago £1 was worth 1.4 euros, in recent days the two currencies have effectively reached parity: £1 buys 1 euro.

One local pensioner, Janet Allwood, treasurer of Age Concern in Estepona, has seen the value of her state pension drop from 586 euros a month to 402 euros.

“We are frightened to spend anything,” says Janet. “We are even worried to spend on airfares to see our grandchildren and have stayed in Spain for Christmas.”

But Janet revealed that many are far worse off than her. Over the last few months Age Concern España has seen a ‘significant’ rise in the number of Britons being referred in desperate need of assistance.

“We’ve been called to help people who have been forced to give up their homes,’ she revealed. ‘Some can’t even afford the airfare back to Britain.”

In one case the Olive Press has learnt, the family of an elderly pensioner suffering from Alzheimer’s, was effectively left to wander the streets of Estepona.

It is a similar story at the Age Care Association in Fuengirola, which offers welfare information and advice, practical support and emergency help when needed.

Its president Dr Charles Betty told the Olive Press that there has been a huge increase in the number of people contacting the charity for advice on repatriation in recent weeks.

“Over the last few months we have had a steady stream of calls from people saying that if things don’t improve soon they may need to go back to the UK,” he sai. “In the last three days alone I have had no less than six separate requests for help.”

The Olive Press has discovered that most expatriates are now shopping much more carefully and at the cheaper supermarkets, such as LIDL or Dia.

Interestingly people who live in rural areas are actually finding that small local shops are often cheaper than the big supermarkets.

Sandra Edge, who has lived in Montejaque, near Ronda, for the last six years, said: “We always used to go to Ronda two or three times a week to shop. Now we probably only go to Ronda once every two or three weeks and shop locally, which has proved to be surprisingly cheap and saves on petrol.”

She added: “We used to eat out regularly, two or three times a week, but now we can only afford to eat out once a month if we’re lucky!”

Her husband Philip has seen the value of his pension fall by a third in the last few months.

At the same time their health insurance premiums have also rocketed by almost six per cent.

A major problem is that many expats emigrated to Spain some years ago when they were in their sixties and have now reached their late seventies and early eighties and are beginning to suffer health problems.

Dr Betty of ACA said: “They are struggling to pay their health bills. Many have already cut their losses and are heading back to the UK where they are still entitled to free NHS care.”

One funeral director told the Olive Press that hundreds of pensioners were currently going back. “Business is slow because the old folk are going back to the UK to die,” he said.

The Age Care Association (ACA) in Fuengirola has a hospital and home visiting team and a Help Desk which is available every Wednesday between 10 am and 12.30 pm at The Manila Bar, Los Boliches in Fuengirola. Contact the charity at 691 761 088