Will the fans and police in Sevilla be any better behaved than in Madrid? After all, Sevilla’s stadium was the scene of an ugly unprovocked police attack on Spurs fans as we reported two years ago

A FOOTBALL friendly between England and Spain has been switched from Madrid to Sevilla next month due to racial abuse.

This is despite a bloodbath that was caused after Sevilla riot police indiscriminately attacked male and female supporters of Tottenham Hotspurs two years ago.

The decision was taken after the English FA vetoed a return to Madrid, the scene of ugly racial abuse during the countries’ clash in 2004 at the Bernabeu Stadium.

Spain was sanctioned after Ashley Cole and Shaun Wright-Phillips came under a barrage of monkey taunts.

Now the England team will take on the European Champions on February 11 at Sevilla’s Ramon Sanchez Pizjuan Stadium, where police indiscriminantly attacked Tottenham fans during a UEFA cup match in 2007. 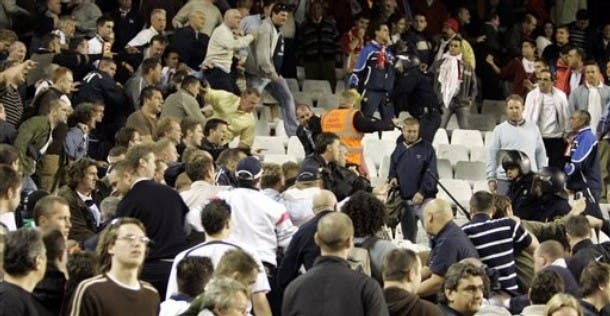 At the key quarter final stages of the cup, police waded into male and female fans with riot batons with little provocation.

As the Olive Press reported the trouble began when one female supporter was shoved over and then hit over the head.

Even one disabled fan in a wheelchair was attacked, while another fan was taken onto the Spurs bus after the game with a broken nose and teeth.

The British fan, Chloe Hayes, 22, who had travelled to Sevilla with her father Paul, was clubbed over the head with a riot baton for arguing with a policeman about her seat.

In tears, with a nasty bruise on her forehead, she told the Olive Press: “We got in late, missed the goal and then got attacked by these mad police. All I was trying to tell him was to find my seat.”

The incident happened five minutes into the game as dozens of Spurs fans were still being funnelled into the ground due to slow security measures.

With numerous supporters having difficulty finding their seats due to a shortage of stewards, there was a lot of confusion.

Despite being no trouble between the two groups of supporters a dozen riot police were suddenly sent in to get supporters to their seats.

The 39-year-old owner of event management company Fours Seasons Event Management, said: “They just seemed to be hellbent on starting trouble from the minute we got to the ground.

“It had been a lovely day without an ounce of trouble. All the supporters mixed and got on well, taking pictures and singing songs, but when we got to the ground the mood changed.

“The police were stopping people coming in. Making it really slow. There were only two turnstilles for us to get through and then they closed one.

“It took ages and a lot of people missed the first goal. It was like they were trying to wind us up.”

With tens of thousands of England fans expected to descend on Sevilla next month – many of them expatriates from the Costa del Sol – similar policing could end up in a bloodbath and massive own goal.