Golf not so bad for the environment after all, with one of world’s rarest birds colonising its greens

IT may not be the most typical golf course dweller, but one of the rarest bird species in the world has found that the greens of Iberia make ideal homes.

Around 30 Hermit ibis, reared in captivity in Jerez, have nested on golf courses following their release into the wild last year.

Colonies of the Ibis (Geronticus eremita) can be found on golf courses near Vejer and Jerez. 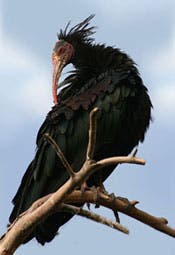 One bird was spotted on a course in Marbella, while five have crossed the border and nested at greens in southern Portugal, including Vilamoura and Lagos.

“Golf courses seem to be ideal for the ibis,” said José Manuel López, who leads the Foundation Ibis scheme, which works to reintroduce the bird to Spanish skies.

“The well-tended greens are home to many invertebrates that the bird feeds on. Frequent watering means that the land is soft, meaning the bird can use its long bill to dig for larvae and beetles.

“Golf courses seem to be a secure environment for the birds.” he added.

Before the reintroduction of the birds, the Hermit ibis was last seen enjoying Spain’s skies in the 17th century.

And in a pleasant twist of fate, the director of the Vilamoura course on the Algarve is also the chief of a leading Portuguese bird charity.

“Having this bird nest on the complex has attracted interest from many bird watchers. It is not every day that you have a rare species make its home at a golf course,” he said.

In September 2008, a breeding pair became the proud parents of three chicks. This is thought to be the first time in 400 years that the species has produced young, not in captivity.

The bird, with only 300 or so remaining in the wild in Morocco, is listed as critically endangered.