AN English writer has based a new novel on the discovery that Julius Caesar and 40,000 legionnaires once marched through his garden.

Alistair Forrest learned that the army had decamped across his land in 45BC in order to attack the sons of Pompey, who were opposing him at the time.

The former journalist from Wales spent a year piecing together the route the famous military tactician took through his picturesque valley near Monda.

Then known as Munda, the mountain town was one of the strongholds of the Pompey brothers Cneo and Sexto.

They were strong rivals to Caesar, who personally led his troops into the bloody March 17 battle, which ended in the slaughter of 30,000 fellow Romans and Spanish conscripts.

“I wanted to know why Caesar was so out of character by personally fighting in the front line,” said Forrest.

“It took several months to research and I soon discovered that the battle took place slap bang in the valley where we lived.”

Forrest, who moved to Monda with his family in 2005, then developed the storyline for his first historical novel Libertas, which is published this month by Quaestor2000. 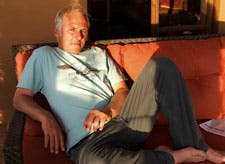 A story of bravery, love and hope, it explores the reaction of local youths to Roman rule, including that of the central character, Melqart, who finds himself on the losing side.

But he refuses to give in to the despair of horror and war and, in a gripping adventure that takes him to North Africa and Sicily, believes his family can be rescued from slavery.

Forrest himself is sadly now about to move to Malta to research another book.

His house is now up for sale for 2.2 million euros.

“With the historical value and stunning views, we hope it won’t be too hard to sell, but it has nothing to do with writing the book, honest,” said Forrest.