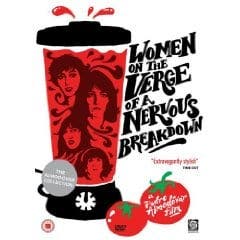 THEY have already got their Desperate Housewives, now America is about to have Women on the Verge of a Nervous Breakdown.

In a massive coup for Spanish film director Pedro Almodovar, his 1988 Oscar-nominated comedy is to be turned into a television series for Fox TV.

The director – famous for his black comedies that feature off-beat characters from drag queens to pregnant nuns – is advising on the project, which will be set in the US.

But Almodovar, who has won Oscars for Talk to Her and All About My Mother, will be executive producer for the programme.

“Pedro Almodovar is arguably one of the great film-makers of our time, and this movie overflows with rich, funny, complex characters and relationships”

Fox TV decided to acquire the rights to the comedy – about a voice-over actress who is dumped by her lover – because of the director’s global prestige and strong female characters.

“Pedro Almodovar is arguably one of the great film-makers of our time, and this movie overflows with rich, funny, complex characters and relationships,” David Madden, executive vice-president of Fox, told The Hollywood Reporter.

“We know that the Almodovar brand will be meaningful both internationally and domestically.”

This is perhaps the first time Almodovar has been described as a brand.

The man who got his start with sex-crazed, murderous matadors, before moving on to subtler stories, is rarely described in commercial terms in Spain.

He is better known as being part of the counter-culture movement of the 1980s, when arts and alternative lifestyles flourished after decades of repression under the Franco dictatorship. Almodovar isn’t even a darling of Spain’s film academy, having quit after a row over voting procedures.

But the colourful, pop aesthetic of his films is clearly made-for-TV material. In Women on the Verge, the main character sports high heels and a tube skirt worthy of Sex and the City.

The director himself describes the film in terms that could apply to other tales of the rich US suburbs, like Desperate Housewives. “The world needs a good overdose of optimism. For that reason I have tried to make a film in which everything is very beautiful and pleasurable, even though it seems unreal,” he said.

A spoof of 1950s American comedies, the film bursts with gags. A murder is averted by a shopping cart. Phones and answering machines, Almodovar’s pet peeve from his days working at the Spanish firm Telefonica, are repeatedly thrown out of windows.

The gazpacho spiked with sleeping pills and intended for Pepa’s unfaithful lover is consumed by someone else. There are chase scenes, a mambo-loving taxi driver and a kiss from a young Antonio Banderas. The film’s ending is typical of Almodovar, but it may not appeal to the Sex and the City brigade: Pepa finally tracks down the lover who jilted her – and decides she’s better off without him.