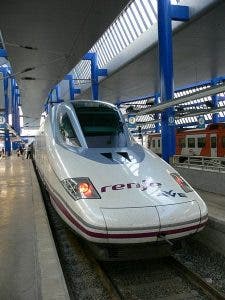 As President Obama congratulates Spain on its fast track railways, self-confessed trainspotter Ray Ward licks his lips even as plans to bring a new AVE line from Antequera to Algeciras might come right through the middle of his back garden

IMAGINE travelling by train from London to Brighton in 23 minutes or to Southampton in 32 minutes. Imagine letting the train take the strain from Oxford to Brighton via the outskirts of London in just 50 minutes. Unthinkable, of course.

But not for those of us living in Andalucia. We will soon be able to travel on a network of AVE (Alta Velocidad Española) rail routes inter-connecting all the regional cities in not much over an hour. Malaga to Sevilla in 55 minutes, Cadiz to Granada in 1 hour 38 minutes, and Ronda (where I live) to Malaga, Sevilla, Cordoba AND Granada in less than an hour. Hurrah!

The Spanish government is committed to constructing 10,000 kilometres of high-speed rail routes throughout Spain by 2020.

The plan means that 90 per cent of the population will be no more than 50 km from a station on an AVE route.

It is no surprise then that President Obama recently praised Spain´s railways, while launching a similar plan in the US. The plaudits are certainly deserved. There are already more high speed routes in Spain than in either France or Germany, and both are well ahead of the UK.

Funded partly by EU grants and loans from the European Investment Bank, the network is cutting Spain´s carbon emissions because AVE trains use 19 per cent less energy than conventional trains.

In fact, it is calculated that a passenger on the recently inaugurated Madrid to Barcelona AVE line accounts for only one-sixth of the carbon emissions of an aircraft passenger.

Also of interest is the new European rail freight plans, which aim to reduce further emissions from road traffic.

In particular, this includes an upgraded route to Algeciras, which – due to its close proximity to Africa – is the principal southern European freight port.

An EU committee is presently studying a project for a 39km tunnel or bridge link between Punta Palomas, near Algeciras, to Punta Malabata in Morocco, where a high-speed rail network is under construction.

And this is where my home town of Ronda comes in. It is sometimes stated that the new exciting Africa connection will be served by a new route from Cadiz. But the distance from Cordoba to Algeciras, via Sevilla and Cadiz, is 60 per cent longer than via Antequera (Bobadilla) and Ronda.

High speed is about low travel time so a Cadiz extension simply doesn’t make sense for passengers, while a merely upgraded present route is more than ample for freight trains.

In Ronda some locals tell me with confidence that AVE trains will never come to the town or pass beyond to Algeciras.

And they are right. They will not come to the town, but instead will come to the small hamlet of La Indiana in the valley below, where a brand new train station will be built.

It will be almost half way along a 72km double-track route between Algeciras and Antequera and in 2008 an environmental impact study was undertaken by two companies.

Labelled Proyecto 776, the only map ever produced was a rough sketch displayed by the Ministerio de Fomento to announce it at a press conference two years ago.

Going by this map it will go through Almargen, Alcala del Valle, Setenil and through El Llano de la Cruz, the valley where I live.

It does make geographical sense and many AVE stations are built on the outskirts such as at Segovia, for obvious reasons.

It is rumoured that the decided route will be made public in January, 2010, with the completion of the works by around 2016.

AVE routes require wide radius corners and shallow gradients, as well as measures to reduce noise and other environmental impacts.

The most severe gradients are about 3.5 per cent, so for the new route a tunnel would be required under a large part of my valley near Ronda.

This is good news as tunnels have the advantage of reducing land purchase costs and minimising environmental impacts, provided they don´t hit aquifers, as they did near Valle de Abdalajis.

My guess is that it will actually avoid my valley altogether and go into the next one, Ronda la Vieja, via a tunnel through the Sierra de Salinas. We shall have to wait and see.

Anyone suggesting that the rail route south from Ronda through Cortes is too difficult to upgrade to medium-speed AVE standards should consider the present construction of the 350 kmh rail route between Barcelona and Perpignan through the Pyrenees.

It is estimated that using the S130 trains the travel time between Algeciras and Ronda will be 58 minutes and to Antequera just 22 minutes, some 40 minutes shorter than by road.

The total time between Algeciras and Madrid (almost equal to the distance from London to Inverness) will be reduced from over 5 hours to 3 hours 45 minutes.

Between Ronda and Madrid a time of 2 hours 40 minutes will be possible.

Along the new 250 kmh route between Sevilla and Granada, via Osuna and Antequera excavations are well advanced. This will continue to Almeria and connect with the new AVE routes to Alicante, Valencia and Barcelona.

Upgrading of the Sevilla to Cadiz and Huelva routes for AVE trains are due to be completed in 2012.

At present the citizens of Antequera are demanding the new Sevilla to Granada line, which passes close to the town, has a ‘false tunnel’ placed over it to minimise the noise impact.

At Loja there is a dispute about whether the line passes by the town, through a tunnel to the north or on a viaduct to the south.

But AVE routes cannot take account of too many local obstructions and, in particular, the protests of property owners. And, after all, financial compensation is paid to those directly affected.

I accept that from the terrace of my house that there will be a new blot on the landscape, but that, I´m afraid, is progress in the greater scheme of things.

Whatever, the planned high-speed rail network of Spain is on course to be completed by 2020.