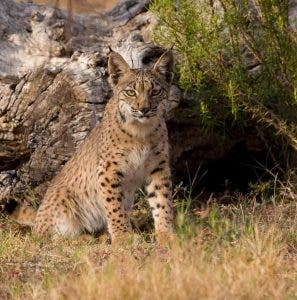 After a sharp revival over recent years, a ‘green corridor’ could now link the lynx populations of the Sierra Morena with Donana in the south, writes Andrew Pearce

LESS than ten years ago, lynx numbers appeared to be in dire straits.

With only 102 species of the world´s rarest wildcat being recorded in Spain in 2002, debate intensified over the species’ extinction.

But now, after a series of urgent conservation measures were launched, their numbers have incredibly doubled in under a decade.

With their population soaring to 150 cats in the Sierra Morena and consolidating at 50 in the Donana National Park – their two main concentrations – experts are optimistic that the two groups might soon be united via a revolutionary ‘green corridor’.

This would create a nature trail more than 200km in length that would allow lynxes to socialise and mate with each other.

“The dream could become a reality in six years time,” reveals Miguel Angel Simon from Life, the group responsible for the species’ survival.

“Donana already has some trails that connect with the Sierra de Aracena like that of the caribou deer and we are working on one for the lynx.

“It would be a great way to further strengthen the gene pool if they were able to cross-breed between both regions.”

Nowadays, the situation is so healthy that lynxes have been spotted as far north as Ciudad Real – in Castilla-La Mancha. They are also said to be breeding well in the Aracena region.

It is a remarkable turnaround which has seen the population in the Sierra Morena grow from just 69 cats to 150 in just six years.

According to experts, the crucial factor behind the surge in numbers has been the harnessing of the predator-prey relationship or in other words, increasing the rabbit population.

More rabbits equal more food for the wild cats but only recently was this vital connection fully taken on board.

In addition to various captivity programmes, the introduction of hundreds of domestic rabbits into the wild once a week – has reaped huge benefits.

“When we finally started to act in 2001, studies showed us that the density of lynxes and rabbits was almost zero near to the Yeguas river,” said Simon.

He explained that in both the 1950s and 1980s rabbit numbers suffered hugely due to a series of epidemics that decimated the population.

Moreover, the huge numbers of pine forests that were planted in Franco’s era also destroyed the natural habitats of rabbits and consequently the amount of lynxes.

Simon continued: “But thankfully this has all changed with the implementation of our action plan.”

“In the Yeguas river area, for example, we have gone from recording just seven lynxes in 2001 to a highly-encouraging 49 last year.”

Despite the recent success story, some conservation groups are reluctant to get carried away with the encouraging news.

“For decades, the disappearance of lynxes in Andalucia was not important,” said Joaquin Reina from Ecologists in Action.

“Up to the year 2000, neither experts nor politicians did anything about it, despite the persistent fears.”

“Although we have seen great changes, we still don’t have a comprehensive recovery plan.”

Even the upbeat Simon is well aware of the challenges that lie ahead if the revival is set to continue.

“Experts warn that up to half these lynxes could still be at risk from dying out,” he cautioned.

However if the recovery continues in the same vein the group is looking to start the re-population of the lynx in the Guarrizas area in Jaen and Guadalmellato area of Cordoba in 2010 to 2011.