WHEN Fernando Alonso roared to victory in this Formula One season’s inaugural race, even King Juan Carlos was in Bahrain to celebrate his stunning victory.

Yet there was one notable, yet often forgotten absentee, his singer and model wife, Raquel del Rosario.

Despite the high-profile appearances of fellow pop star girlfriends such as Nicole Sherzinger at the race events, Rosario ensures her public appearances remain low key.

The member of Spanish group El Sueno de Morfeo prefers to avoid the limelight as the tenth best-paid sporting star in the world steals the headlines.

The talented 27-year-old, from Gran Canarias, has steered clear of the red carpets as she focussed on her alternative music career.

For the self-taught musician, who began song writing at 14, formed her popular Spanish Celtic rock band in 2004 after moving to Asturias.

But just two years later Rosario wed the two-time world champion and settled down in Oxford with her racing beau.

Yet Rosario’s perennial spotlight shunning has consistently fuelled rumours that the 2006 marriage is one high-speed corner from crashing and burning.

Last December Alonso’s agent, Luis Garcia Abad, denied reports that the pair were about to split.

For the moment, it appears that the rival to Lewis Hamilton and Jenson Button’s show-stopping girlfriends is happy outside of the pit lane. 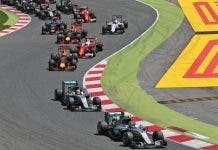