FOOTBALL boss Terry Venables has scored an own goal after his plans to build a luxury sports leisure complex were dubbed a “crime against nature”.

The former England supremo came under fire from green campaigners and locals after receiving planning permission for a 500m euro resort on the Costa Blanca.

“This project would be a disaster for the area.”

It boasts 13 football pitches, 12 tennis courts, a golf course, horse riding and sports facilities as well as a 95-room hotel alongside 300 villas.

Planned for the sleepy village of Penaguila, environmental group Ecologistas en Accion claimed the scheme would “destroy farmland and scar the landscape”.

Spokeswoman Julia Molto said: “This project would be a disaster for the area.”

Villager and town hall member Henrique Llorens, 62, complained: “Building it here would be a crime against nature.”

But the charismatic coach – nickamed ‘El Tel’ after his stint as Barcelona manager in the 1980s – hit back following the criticism.

“It is ironic that it is being criticised by green campaigners when it is going to be eco-friendly and sustainable,” he countered. 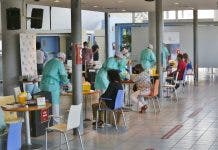