IT’S time to sweep out the Presidential Suite.

For the bling capital of Europe could actually have a president in town.

America’s first lady Michelle Obama and her daughter Sasha, 9, are coming for a five-day visit to Marbella next week.

And the big question is: will the world’s most powerful man, Barack Obama, be joining them for his 49th birthday on August 4?

While the White House insists the president will not be joining his family, hotel sources claimed that a cake has been ordered for the big night.

Another Olive Press source claimed that the president would fly into the US air force base in Moron de la Frontera, where he would then be flown by helicopter to the coast.

In total, the booking for the Obamas – excluding their oldest daughter Malia, 12, who is at a summer camp – is for 35 rooms at the luxury five star Hotel Villa Padierna in Benahavis, where standard doubles cost from 250 euros per night.
A group of friends will be joining the Obama ladies, and sources revealed that many of the other rooms are for their security guards.

The group will later be taking a private jet to Mallorca, where they are scheduled to spend a day at the Spanish king’s Marivent Palace.

Despite the uncertainty surrounding the visit, Prime Minister Zapatero told reporters that he hoped the president himself would be coming to Spain.

Hotel owner Ricardo Arranz confirmed that the Obamas will share the hotel – which was recently voted Spain’s most luxurious – with the resort’s normal clients.
He added: “They don’t want anything special.”

The U.S. press was sceptical of the visit until it was confirmed by the White House on Monday night. When we contacted a columnist from The Washington Post she first told us, “There is a huge political downside to a White House family vacationing overseas.”

But afterwards, she said, “Looks like you guys were right.” 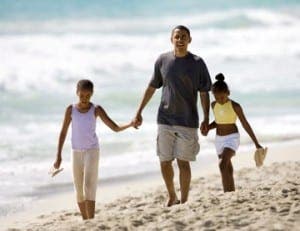 After encouraging Americans to travel to Florida’s oil-threatened Gulf Coast, the Obamas will spend an August weekend there.

But until then, the Hotel Villa Padierna – part of the Ritz-Carlton chain – will certainly suffice. The luxury golf spa is located in Benahavis between Marbella and Estepona.

Said to be ‘suitable for royalty’ the Tuscan-style resort boasts three golf courses, five restaurants, a spa, and private villas for up to 5000 euros a night.

Security officials are expected to arrive this week to examine hotel grounds.

The family will follow in the footsteps of high profile Marbella holidaymakers such as Frank Sinatra, Tom Cruise and Jamie Oliver. And there’s no doubt Marbella would love to add ‘President of the United States’ to that list.

The Olive Press has updated this article since its original version.