WITH unemployment running at up to 70 per cent in some Axarquia villages, winemaker Clara Verheij believes she may have found a possible solution.

Her profitable vineyard Bodegas Bentomiz, in Sayalonga, is currently producing 30,000 bottles of top quality wine a year from the extraordinary steep slopes of the region.

Already exporting to over a dozen countries, many are being sold at the world’s top restaurants and hotels, including Raymond Blanc and Gordon Ramsey’s Michelin starred joints in the UK.

“We have proven that it is possible to make these harsh slopes productive,” explains Clara, who comes from Holland.

“I just hope this success will encourage more of the youth of the area to take an interest in this top quality product.”

The recession has already seen the inevitable drift of workers back to the land to make a living. 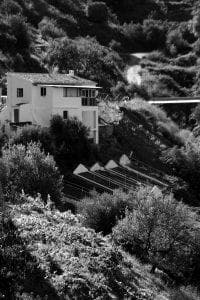 And while the bodega only has two hectares under vine, it ‘controls’ another 30 hectares cared for by local families.

“But the price for grapes is too low and there are currently too many sellers and not enough producers,” she explains.

This is certainly the case for the grape and raisin producers of the Axarquia, who number around 3000 families.

Much of their crop is going to waste because they have no market, due to the low prices of raisins coming from principally South Africa and Greece.

“There is no guarantee that after all the hard work they are going to be able to sell,” says Jose Gamez, of agricultural trade union UPA Malaga.

Currently many of them are having to live off the grants which are little over 1000 euros a hectare.

And with the average producer living off half a hectare of vines, they are certain-ly not going to get rich.

“We work incredibly hard from sunrise to sunset all through August to get all the grapes in,” says farmer Juan Gutierrez, 53, from Almachar. “And all for little financial benefit.”

Traditionally the sweet Moscatel grape grew extremely well in the Axarquia, largely due to its close proximity of the sea, which brings in breezes to cool the grapes down.

It has long produced fabulous high quality sweet wines, which in 1933 led to the Malaga region being the first in Spain to have its own DO – or denominacion de origin.

But the area can claim to have one of the longest traditions of winemaking in Spain, with vines first being planted by the Phoenicians up to 3000 years ago.

They were later heralded by the Roman poet Columella and back in 1502 the Catholic Monarchs took the first known measure to protect a Spanish wine from imported products.

It came about just as the wines started to become extremely fashionable abroad, particularly in the UK from the 17th century.

There were said to be around 14,000 wine presses in Malaga then and – along with Jerez – many British merchants moved to the area.

Evidence of their success can still be found, for example, at Venta Galway, high in the Montes de Malaga hills, named after an Irish merchant who settled there .

But, as was the case in many European regions, the industry was destroyed by the phylloxera bug in the late 19th century. It wiped out whole vineyards and the area has never recovered.

The amount of land under vine dropped from 100,000 hectares at its peak to just 6,000 hectares today; many of this for raisins or eating grapes.

So the crucial work Bodegas Bentomiz is doing to help to make the wine fashionable again abroad is extremely important.

At the vineyard, high in the hills overlooking the sea in Sayalonga, it is interesting to see how the planting methods vary from other wine regions of Spain.

The vines – some of which can be up to 100 years old – are planted in hollows, which help to collect much needed moisture in winter. 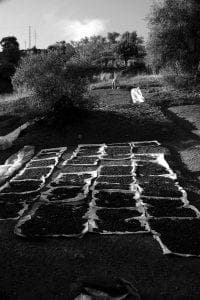 They are also left to grow on the ground with the bunches of grapes protected from the blazing sun by foliage.

“The real problem is that the yields are low and everything has to be done by hand due to the steepness of the slopes,” explains Clara. “It makes it extra hard work to be profitable.”

The bodega currently buys grapes from a string of local farmers, as well as a steady supply from the larger, flat vineyards north of Antequera, near Mollina.

All in all the vineyard is currently producing over half a dozen wines, under the Ariyanas label, including a spectacular, flinty dry white ‘Sobrelias Finas’, which stays in its lees in vat for four months before bottling.

There is also an interesting red wine made partly from the indiginous Rome grape, first introduced by the Romans.

So good are the wines that British doyenne of wine Jancis Robinson awarded its sweet Moscatel a lofty 18 out of 20.

“That’s as good as Vega Sicilia, traditionally said to be one of Spain’s best wines” adds Clara proudly.

“We are very happy how things are coming on and really hope that the improvement continues.”

The wines are that good around the Axarquia, they certainly deserve success.