BEING so close to Africa it is perhaps not that surprising that Andalucía is full of creepy crawlies of the flying and crawling variety.

Every year millions of people are bitten or stung by these poisonous creatures with snake bites alone causing around 60 fatalities a year.

Having lived in the south of Spain for nearly six years he has been amazed at the lack of knowledge expatriates have about the rich variety of creatures on their doorsteps.

He explains: “Most people have no idea that the huge funnel web spider and Black Widows are found in Spain!

“But poisonous creatures can be found in all areas of Andalucia, from the costas to the campo, in the basement, the garden or even the bedroom!”

He visited Andalucia as a 10- year-old, and was amazed by the variety of creatures

Now living in the Antequera area, he first visited Andalucía as a ten-year-old, and was amazed by the sheer variety of creatures around.

“On my first day I spotted a large chameleon sunning itself.

As I looked at this awe inspiring reptile, I wondered to myself, what other amazing creatures I would discover in this land.

“Very little research has been carried out in this area by British naturalists and I have already discovered two new species of arachnid and insect.”

So now, some 19 years after his first visit, he has put together a manual to help the average tourist tell one creepy crawly from another.

All the animals you wouldn’t want to be bitten by are listed in this book with colour photographs, and useful information, including possible symptoms, treatments and a ‘Toxic Rating’.

Here, is a small selection of the nasties to watch out for.

So have a read, it could save your life! 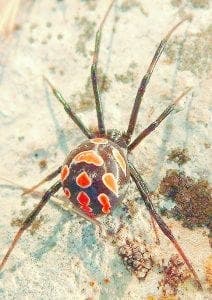 Description: Probably the most dangerous spider, the Mediterranean Black Widow is a close relative of
the deadly Red Back Spider of Australia and around the same size, with a leg span of 25mm and pea sized abdomen. It is very distinctive with a glossy black body and red bars or spots on the abdomen. They are mainly nocturnal, spinning webs in which to catch their prey. Once caught, the widow injects lethal venom that quickly kills its victim before eating it. They usually prey upon insects like crickets, but are able to overpower larger prey such as scorpions.

Treatment: If bitten on the hand or arm, keep it below heart level and immobilise the patient until help arrives. Medical attention should be sought immediately. It is important that doctors are advised of the identity of the spider. Treatment may include the use of painkillers and muscle relaxants. The general treatment for serious cases is an intravenous dose of 10 per cent calcium gluconate solution, magnesium sulphate and diazepam. The antivenin is no longer produced in Europe.

Remarks: It is considered to be the most dangerous spider in Europe. 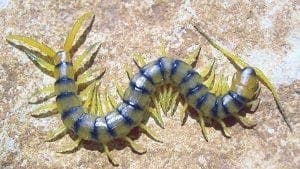 Description: The largest centipede in Europe, it has a pair of antennae, eight eyes, poison claws, mandibles and other mouthparts used for chewing food. The colour of these centipedes varies, depending on their geographic location although the general colour is yellow with black crossbars and they can reach up to a length of 150mm. They are nocturnal with voracious appetites and prey upon a wide range of invertebrates including spiders, scorpions and small reptiles which they grasp with their poison claws and inject with venom.

Habitat: One of few centipede species to be found throughout Southern Europe they typically inhabit dark damp environments, such as under rocks and logs.

Symptoms: Although the venom does not seriously affect most people, the patient may develop an allergy to the toxin which can lead to anaphylaxic shock. Most victims experience a sharp local pain followed by sweating and inflammation. The pain may become more severe over the next five to eight hours and painful inflammation of the affected limb may persist for several days to weeks.

Treatment: Place a cold compress on the wound to reduce swelling. In severe cases seek medical advice. Antihistamines and anti-inflammatories are usually administered as well as painkillers.

Remarks: These animals will only bite if handled or molested. If you’re camping in the countryside it is advisable to check foot-ware and clothes before putting them on, especially if they have had contact with the floor. They are unable to climb smooth surfaces such as glass and metal. 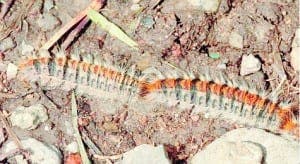 Description: So-called because of their habit of walking head to tail in search of food, the processionary caterpillar is probably the most dangerous insect in the Mediterranean region. They are generally reddish brown in colour and covered with long grey/white hairs known as setae. There may be hundreds of caterpillars seen walking nose to tail, winding along roadways, paths or golfing greens. The caterpillars are covered with brittle hairs, which cause a severe reaction when they come into contact with human skin. The hairs remain toxic even after the caterpillar has died and can also be carried in the air causing respiratory damage if breathed in. The caterpillars present a high risk during spring and are most virulent from late February. After pupation the resultant moth is an important food source for many animals including bats, birds and reptiles. The adult moths are not toxic.

Habitat: The caterpillars feed on pine needles and cause devastation to pine forests. Take extra care when walking among pine trees from February onwards, especially if you have children or pets with you.

Symptoms: The hairs when in contact with the skin can cause severe irritation or anaphylaxis. General symptoms include severe itching, also localised pain which may spread to other parts of the body. The inhalation of hairs can cause serious respiratory problems and severe irritability of the eyes, stinging and symptoms of conjunctivitis which can lead to long term eye damage. Children and the elderly can be more susceptible as they have a weaker resistance to the poison. Many victims show signs of shock. In serious cases, anaphylactic shock, increased heart palpitations and respiratory difficulty can lead to fatal consequences.

Treatment: An ice pack will help to reduce the inflammation, take Antihistamine tablets as an early treatment. Apply antiseptic lotion topically to sooth the skin and seek medical assistance immediately. The effects can last many weeks or months. Corticosteroids may be prescribed to reduce inflammation as well as other treatments depending on individual circumstances and antihistamine tablets for allergic reactions.

Remarks: The very first rule is never to touch these caterpillars and do not burn the nests as the resulting smoke is toxic if inhaled. All pets should be kept well away from the ‘processionals’ as they may try to eat them.