IT is the biggest corruption case Spain has ever seen with a staggering 95 people in the dock.

Taking some five years to finally come to trial, the charge sheet alone runs to over 200,000 pages, while a completely new court had to be built to house the megahearing.

Welcome to the weird and wonderful world of the Malaya trial, which centers around the laundering of some 2.4million euros via Marbella town hall.

A staggering tale of corruption and greed, the trial, which began on September 27, sees the collapse of a web that included three mayors, 15 councillors and up to a dozen foreign investors.

Expected to last at least a year, the prosecution is seeking a total of 500 years for a string of offences including bribery and corruption, money laundering, tax evasion and a misuse of municipal funds.

While its accused include celebrated – and even Sean Connery as a side act – the case centres around a money laundering web that was spun by former chauffeur turned Svengali, Juan Antonio Roca.

Born in Cartagena, Murcia, in 1953, Roca moved to Marbella in 1991 after his property development company Comarsa was declared bankrupt.

But following a meteoric rise, he went from being the late mayor Jesus Gil y Gil’s chauffeur to becoming the councillor for ‘Urban Planning’ for a staggering 11 years from 1992 until 2003.

Roca and his string of accomplices are accused of accepting bribes in exchange for building licences from a string of real estate promoters.

It is alleged that during his time in office, Roca amassed a fortune worth at least 125 million euros that included a string of properties, a huge collection of exotic animals and a private art portfolio that included a Miro that he kept in the loo.

As judge Miguel Ángel Torres stated in his opening statement: “Roca is a man who had total control over the town hall. The councillors were subordinate to him.

“He is the person who all developers went to in order to see their wishes satisfied. And in over 15 years he went from being on the dole to amassing tens of millions of euros.”

But now the so-called ‘boss’ of Marbella is facing 30 years in prison, with more than 810million euros in fines.

And interestingly, he is the only one of the 95 defendants who is currently behind bars, serving a previous sentence for a separate case.

The Malaya case first came to public attention back in March 2006, when police vans first turned up to raid Marbella Town Hall.

However the extent of corruption first became hinted at during the earlier 2003 Operation Ballena Blanca (or ‘white whale’), which saw 41 people arrested and over 250 million euros recovered in a huge separate money laundering case.

In what was the largest money laundering operation ever mounted in Europe, Spanish police were allowed to tap the phones of suspects – a number of lawyers and notaries – for up to a year.

Incredibly, investigators discovered that much of the laundering appeared to be going through Marbella town hall itself.

It led Judge Torres to call for a parallel investigation – codenamed ‘Operation Malaya’ – which soon led to a series of high profiles officials arrested.

The crackdown saw almost two thirds of Marbella’s councillors pulled in, as well as a series of well known construction and real estate bosses.

The scale of the corruption proved so pervasive that control of Marbella town hall had to be temporarily handed over to a caretaker administration appointed by the Junta until local elections could take place in 2007.

The first few weeks of the trial have certainly proved eventful.

During the initial proceedings, Roca’s lawyer, Rocio Amigo, (who took up his defence just a month ago, after his previous barrister stood down) tried to get the whole case suspended before it had begun.

In particular she claimed that certain real estate documents were missing and some of the accusations had already been dealt with.

Also of interest was the linking of police chief Juan Antonio Gonzales to the case, as the shady figure behind the initials J.A.G who apparently took a bung of 200,000 euros from Roca.

Finally the lawyer of Julián Muñoz, Javier Saavedra – who previously defended convicted
British murderer Tony King – declared his innocence insisting that no payments between
Roca and Muñoz could be proved. 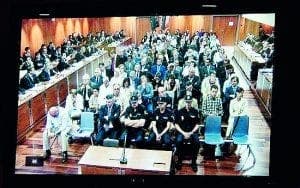 And as if the case wasn’t allencompassing enough, 30 separate cases have subsequently been spawned off the back of the main Operation Malaya case highlighting just how far and wide Roca’s web really stretched.

Here, the Olive Press gives a rundown of the key figures caught in Roca’s web.

A former waiter, Muñoz – nicknamed ‘Cachuli’ or ‘chancer’ – successfully rose from nothing to become the mayor of Marbella in little more than a decade. As the boyfriend of the famous singer Isabel Pantoja, his face has frequently appeared in gossip magazines throughout Spain. During his short term of office he publicly fell out with Roca who had him ousted as mayor. And he has now spent more than two years in prison and faces 10 more on charges of perverting the course of justice, embezzlement and bribery.

A former singer, Yague was appointed as mayor by Roca following a vote of no confidence against Muñoz in 2003. According to investigators she was Roca’s puppet, visiting him at his offices on mondays to receive instructions and she allegedly took 1.8m euros in bribes.

The former deputy mayor, García Marcos was ironically a one-time socialist councillor and ferocious critic of corruption in Marbella. She eventually became one of Roca’s favourite councillors however and was caught saying “I don’t sign a piece of paper, or even read one,
if I don’t get money”. Police found 360,000 euros at her home when she was arrested
in 2003.

Owner of Arenal 2000, Sandokán is one of the many builders involved in the case. He made alleged payments of up 600,000 euros in exchange for ‘urban favours’. He was also Roca’s partner in the company, Marbella Airways.

Famous singer and ex-girlfriend of Julián Muñoz, Pantoja is being charged in a separate case and faces a 3.7m euro fine and three years in prison, for helping Muñoz launder the money he
received in bribes. The star is also accused of obtaining large sums of money during her relationship with the former mayor.

The young judge, 29, is understood to have received payments of 63,000 and 10,800 euros from Roca. Urquia has also been accused of bribery in the Hidalgo fraud case that centred on the Marbella-based lawyers Cruz Conde.

Nicknamed the Lady of Marbella, the Catalan lawyer is accused of being one of the main stooges for Roca. It is thought she was in charge of Roca’s investments and under his supervision became responsible for the alleged money laundering in Madrid and Marbella.

Tomas is a retired footballer who once captained Atletico Madrid. He became a councillor in Marbella in 1999 for the Grupo Independiente Liberal (GIL), founded by long-time Atletico president, Jesus Gil y Gil. After the local mayor was arrested he briefly took office in 2006 as an interim mayor, but was soon after arrested himself. He is now facing 15 years in prison.

Born in Granada Ávila Rojas is another of the many contractors involved in the case. He faces 10 years imprisonment and fines amounting to 55 million euros.

Among his many projects, the business mogul owns a number of shopping centres including ‘La Cañada’ in Marbella. He is facing five years imprisonment and fines of up to 4.8 million euros.

Expats caught in the web

It’s not just the Spaniards that got caught up in this huge operation.

A total of 11 foreigners were also embroiled in the scandal and must now face their day in court.

These include, the German countess Alexandra Sybilla Sofie Grafin Von Bismark, Roca’s employee, Swedish born Karin Marika Mattson, Sergio Gilbert Garcia, born in Gibraltar, and Salvador Gardoqui Arias from France who is known to be one of Roca’s front-men.