MY introduction to the world of Jerez wines began last week, with a visit to my local barbershop. In need of a cut, I found a one chair peluqueriaright in the center of town on the busy Calle de los Arcos.

The barber introduced himself as Pepe and we got to talking.

Given my accent, the mid-snip conversation inevitably turned to where I was from and why I was in Spain. After introductions and orientations, I asked Pepe the ever-popular, “So, what should I do while I’m here in Jerez?”

I had already known that Jerez was famous for its wines. My pre-Spain research had told me so and I had walked past the bodegas that dot the city center plenty of times.

However, I had never truly gotten the urge to investigate the bodegas or even sample the sweet wine. For one, I am rather new to the world of fine drinking.

To me the spirits of Spain are still very much stones unturned, perhaps patiently awaiting my development into maturity. I’ve also always suspected that sherry in Jerez was something for the tourists. Like hookah bars or sweet teas or tee-shirts with bulls on them, I’ve always thought it more of an attraction than anything that reflected the essence of the city.

The barber – whom we might as well call Tio Pepe – was happy to set me straight.

He started at the beginning with the earth itself.

Pepe started with the dry but fertile soil and the thin air of Andalucia. He explained the way these conditions combine with the cool coastal breezes from the Atlantic and the balmy winds from the Mediterranean to make Jerez perfect for grape cultivation.

He mentioned the air quality in the basements, where wooden barrels have nursed sherry into maturity for over 1000 years. He explained to me the history, dating back to the Phoenicians who fermented grapes when Cadiz was still Europe’s only city.

He moved forward through time to the monks and their monastery wines under Christian kings. He told me of the Moorish wineries during the Arab rule despite the Koran’s prohibition of alcohol. “Too good to abandon,” said Pepe, “they figured their God would understand.”

The word ‘sherry’ is in fact the Anglicized version of the Arabic word for the city, ‘Xerez.’ Jerez de la Frontera is wine, wine on the border between Europe and Africa, the Orient and the Occident. Its perfect namesake combines the land itself, the people’s economic livelihood, and the history of influence from the Spanish, Arab, and even English languages and cultures.

Pepe explained that the bodegas began as small family businesses, with hundreds of independent basement stores selling their own special blends. Around the 12thcentury, the British caught a taste and made moves to export sherry to England en masse. Its popularity caught like wildfire and sherry became the drink of choice throughout Europe. Jerez was the toast of every town and so began the international business of Spanish wine.

Throughout the years, sherry has enchanted countless poets and artists. Shakespeare himself reflected on its popularity in his work Henry IV in which Falstaff, the barstool prophet and favorite drinking buddy of the prodigal prince, praises the wine in nearly all of his scenes. He even likens it to the fuel that powers his body and, figuratively, the kingdom itself. He quips in Part II:

“the sherris warms
and makes it course from the inwards to the parts extremes.
illumineth the face, which, as a beacon, gives warning to all
rest of this little kingdom, man, to arm; and then the vital
commoners and inland petty spirits muster me all to their
captain, the heart, who, great and puff’d up with this
doth any deed of courage—and this valour comes of sherris.”

The sherry is the grease in the gears of Falstaff’s body, and the lifeblood of a kingdom itself.

Falstaff later goes on to famously declare, “If I had a thousand sons, the first humane principle I would teach them should be, to forswear thin potations and to addict themselves to sack.”

Addict themselves they did and the sherry boom brought plenty of foreign investors and merchants to Jerez. This turned the wineries into Spain’s first experiment in global corporate enterprise. Little by little, the smaller bodegas gave way to larger conglomerates and several powerful franchises emerged (Tio Pepe/Gonzalez Byass being the most recognizable). These bodegas exported not only to the UK, but to all over Europe, the Americas, Asia and Australia.

The popularity of Spanish sherry outside of the peninsula has since declined. People generally attribute this to the introduction of imitation sherry from California and Australia and to a simple fall from fame according to trends.  Today, much of the profits from Jerez wines go straight to foreign owners and investors who have bought out the original families. Most of these owners are British, though some hail from as far as Japan.

Natives of the city frequently talk of how rich Jerez once was and how far it has fallen. In the current economic crisis, it is rumored to have an unemployment rate of 40%. Yet Pepe assured me that the sweet wine still flows freely throughout Jerez, regardless of the economy. He himself tastes the nectar daily. When Pepe had finished cutting my hair, he scribbled a to-do list of wines on a piece of scrap paper and handed it to me. They were numbered one through seven:

“You must drink them in this order,” he informed me, “and no more than two per sitting.” When I paid him for the haircut, Pepe gave me one euro back as a discount. He insisted that I cross the street to the nearby bar and spend the change on my first taste of Jerez. 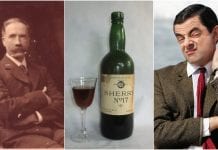 7 GOOD things the British have contributed to Spain