WITH the weather being not so good at the moment I thought I would remember one of the great days out we had earlier this year.

On Saturday, 1 May 2010 Jacqui, a group of friends and I had a fantastic day out in the Alpujarras. We visited the wine festival at Láujar de Andarax.

We drove down the motorway towards Málaga and took the turn off towards Albuñol then followed the road to Albondón where there was a very interesting looking bodega.

After that we followed the road to Cádiar and then towards Ugijar/Cherin and then rejoined the Berja to Alcolea road heading towards Alcolea. By then we were quite close to Láujar. This was not the most direct route but there were some beautiful views.

We parked up in Láujar not far from the bull ring and within a couple of minutes walk from the centre of town where the wine festival and market were in full swing when we arrived just before 2pm.

As well as the wine festival there was a May Cross competition with around 30 crosses set up in different parts of the town. 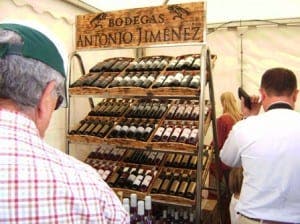 The ladies sampled a fair amount of wine on the 12 or so stands that were set up around the square. However, I was designated driver so I didn’t have much. Between us we ended up buying around a dozen different bottles from various different companies.

One thing we did find out is the large numbers of wine producing factories there are in the Láujar area nearly all of which you can visit and buy wine direct from the manufacturer. Previously we had only ever visited the bodega on the way in to Láujar and didn’t know there were many others around.

At the festival we picked up lots of leaflets and a free book produced by the Junta de Andalucía about all the different wine and olive oil producers in the province of Almería.

When we had bought our wine and walked back to our car we were still feeling a bit peckish even though we had had some pizza from the market. So we stopped into a great bar just along from the bull ring in Láujar and had drinks and tostadas.

After that we drove to the far side of Láujar to show our visitors where we had the barbecues last summer at Rio Nacimiento. What amazed me was the damage done by the winter weather on the road up to the barbecue area. The roads were still passable but were not in very good condition at all. Also, the waterfall was much bigger than I remember.

You can see more photos of the day here.

There is also some video of a performance by a band in the square here on youtube.

It was such a great day out that the friends that we took are planning a trip back to Spain to coincide with the wine festival at Láujar de Andarax in 2011.