CRIME-FIGHTING charity Crimestoppers has confirmed the arrest of another of Britain’s most wanted individuals under Operation Captura.

Dennis Patrick O’Brien was arrested on the evening of Saturday 18 December in the Trafalgar Bar, Calahonda on the Costa Del Sol.

As part of Operation Captura O’Brien was circulated as one of the UK’s most wanted fugitives in December 2007. He was sought on an European Arrest Warrant originally issued in 2006 by Merseyside Police and faces prosecution for conspiracy to supply cocaine with a street value of over £166 million.

Lord Ashcroft KCMG, Founder and Chair of Crimestoppers said: “Yet another superb result for Operation Captura. This arrest now brings the total of those wanted down to 12 out of an original 50 appeals. Fugitives can run, but they can’t hide forever. It is vital that we bring the remaining offenders still on the run to justice. This operation proves how valuable public information is in helping law enforcement track down criminals and bring them to justice, thank you to everyone who has had the courage to pass on information.”

Ken Gallagher, SOCA’s European head of investigation, said: “Our partnership with Spain to target British criminals living and operating there goes from strength to strength. We are making life tough for them, with operations like this getting right into the areas where they live and socialise, and we will be piling on the pressure in the New Year when we launch the next list of most-wanted fugitives.”

On 25 November 2010, the High Court granted SOCA’s application for a Civil Recovery Order against O’Brien’s assets including a large Public House and substantial funds in a bank account owned by Dennis O’Brien as well as a four bedroom residential property owned by his son, Dennis Kelly. Throughout proceedings SOCA maintained that these properties were obtained by monies generated by the criminal activities of Dennis O’Brien and his son James Kelly from which Dennis Kelly had also benefited.

This Christmas, the remaining Most Wanted individuals have been displayed on a ‘Most Wanted’ Christmas Tree.

Dave Cording, Director of Operations at Crimestoppers, added: “It is hoped by publicising and highlighting these individuals over the festive period, that someone visiting friends and family in the UK from Spain may recognise one of the remaining twelve fugitives. Operation Captura has been very successful, but it is thanks to information received from the public that has assisted SOCA and Spanish law enforcement in locating the individuals. I would urge members of the public to continue to contact us anonymously with any information they may have about the individuals featured.” 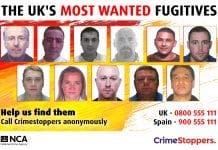