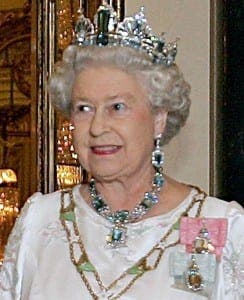 SHE has more recognized titles than any other noble in the world.

Some six times a duchess, 10 times a countess, 24 times a marquise, and the ‘grandest of grandees’, she is even entitled to sit and wear her hat in the presence of the Spanish king.

So the big question is who will bow to whom when the Duchess of Alba, Cayetana Fitz-James Stuart, meets the British Queen this week.

The duchess, famous for her jet set lifestyle, is attending a Gala Concert and Dinner at Buckingham Palace following an invite from His Royal Highness The Prince of Wales.

Today’s event is in aid of the Prince’s Foundation for Children and the Arts and the Duchess will be accompanied by her children Cayetano and Eugenia.

But the protocol between the Duchess and the British Royals is still something of a mystery.

It may in fact be the turn of Queen Elizabeth II to bow down to the woman included on Vanity Fairs best dressed list in 2009.