NEARLY 100 British families have filed for fraud after being embroiled in a property scandal in Estepona.

They accuse a trio of British estate agents of illegally taking deposits for the so-called Costa del Sol Estepona Country Club. In total over seven million euros was put down for 395 luxury apartments, which never had planning permission.

The company Ocean View did not even own the land, which is classified as rustic.

Two of the investors paid over a million euros each.

Marbella lawyer Antonio Flores explained that 68 of the 90 victims are linked to the Estepona case, with the rest in the Dominican Republic and Morocco.

He is calling for Prince Albert of Monaco to give evidence as he participated in a promotional event linked to Ocean View. The president of the Dominican Republic has also been called to testify. 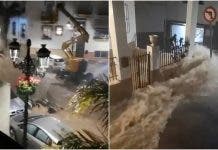