IT was Jacqui’s birthday recently and we were struggling for an idea of what to do to celebrate the occasion. Jacqui decided that she would like a small group of us to have a day trip somewhere and have lunch together.

One of our friends suggested that we take a trip to La Isleta del Moro in the Cabo de Gata area of the province of Almería.

In the past we have been to the inland town of Nijar which is well known for its many ceramics factories and ceramic shops all the way along its long high street. We have also been to the coastal towns of San José and Las Negras. Plus we have driven along several sections of the coast in the Cabo de Gata nature reserve.

There were stunning views from some of these coast roads. We have been bird watching at the lagoon and viewed the lighthouse and salt flats near the town Cabo de Gata. However despite all of these visits to the area we had never heard of the town of La Isleta del Moro.

Our friend John found out about La Isleta del Moro from a great book called Back Roads of Southern Spain, 25 great car trips through Andalusia. The book is written by David Baird and is published by the excellent publishers Santana Books.

We borrowed the book from John and used it to help us find the town.

When we got there we were not disappointed. It is a quaint small town with stunning views out to sea. You get great views from various places in the town itself and from the viewing platform just outside the town.

It doesn’t take long to stroll around the town. If you are lucky you can park in the centre of town near the refurbished communal washing centre. There are then backs streets off in various directions with a few small bars and restaurants scattered around.

We arrived late on a Sunday morning and ended up sitting at one of the bars close to the centre of town for an early birthday drink. It was great to sit and watch the locals from the diving club striding around the streets in all of their diving gear ready to go into the sea.

A lot of the bars and restaurants seemed to be heaving on the Sunday lunchtime we went there. For lunch we chose one restaurant close to the sea that was recommended by John. He said that he had great food there in the past. Simple but well presented fish and seafood dishes. We decided to sit inside rather than on the terrace as there was quite a bit of wind. We had a reasonable lunch in a lovely restaurant with stunning views over the bay. Having discussed it afterwards with John we decided it would have probably been better to visit midweek rather than at the weekend. That way the restaurant would have had more time to look after us in the special way that John has been treated on his visits there. 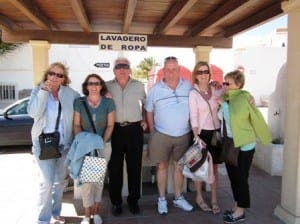 Looking on the internet after the visit we have found the private website www.laisletadelmoro.es that has some useful information and a stunning picture of the town.

So in conclusion, if you are looking for a pleasant day trip there are many places you can visit in the Cabo de Gata region of the province of Almería.

The only thing to watch out for is that in some of the areas we have mentioned there are quite a few plastic greenhouses that occasionally spoil the view a little.