GOOD FRIDAY. The sky, a leaden cloak, hangs threateningly above the Sierra de Lujar. It is a fitting backcloth to the drama about to take place. The rain in the night has punished the plants in the patio. Some are bruised and some are broken. The country lies in thrall to the elements. Even the famous Sevilla morning processions are prevented from taking place for the first time in 80 years.

Here the campo lies cleansed and bleeding under a sea of brazen poppies while the locals pray for a dry evening.

The church has been newly prepared for the occasion.

It stands like a huge infanta, newly clad in a zocolo of dressed blonde stone. Paco the builder has worked relentlessly with his team preparing the building for the weeks leading up to Semana Santa. It is dedicated to the Archangel San Miguel whose proud, eponymous figure occupies an inner niche, sword raised in holy defiance of the Devil carved in ebony and subjugated under his foot.

However, it is not time to celebrate his victory: that will come in September with a jubilant procession and three days of cacophonous abandon to shake the sleepy village to its roots. But San Miguel must wait in the wings as more important protagonists occupy the centre stage.

The church, once a mosque in times of the Moorish occupation, has never seemed so grandiose. The new golden stone round its base glints, drying out in the intermittent periods of sunshine as the day progresses. The Plaza Bar hums to the noise of locals and visitors as the village opens its doors to the throng of friends and relatives taken into its fold in this most important of weeks in the country’s calendar. Later in the day, a more solemn mood prevails as the devout villagers put on their finery and with dignified demeanour slowly progress to the church to celebrate the Easter Mass.

It is a time of solemnity and of hope. Jews and Christians at this time celebrating “Pascua”, the same word for Easter and Passover, each marked by bitterness, hope and redemption.

As the world turns those ancient Biblical stories have a universal resonance. Has Noah’s Flood returned to punish the unsuspecting victims of Japan’s recent earthquake and subsequent tsunami?

Have the tribal battles evoked so vividly in the tale of David and Goliath been acted out in bloody internecine slaughter in Syria and Libya? And have protesters in Bristol this week attacking a new branch of Britain’s most successful supermarket chain not reminded us of the rejection of Mammon as the money tables were turned over in the temple?

It has just turned 10 pm and the dull thrum of a slow drum pattern warns of the solemn approach of the Easter procession. The rain has stopped and through the ancient walls of my house the litany of faithful followers reaches my ears.

Opening my bedroom window, I come face to face with the figure of the Virgin held aloft by the penitent supporters. The float is bedecked with a gorgeous mass of white flowers and the sulphurous glow of the street lights competes with the hand held candles of the followers to imbue the figure with an eerie aspect.

There are fewer attendants than I remember, but they are led by a small band of figures in their sinister purple hoods so that the small village becomes a replica in miniature of those grander events taking place in major cities where the weather permits. At last the priest’s voice quietens as do those of the congregation and the gathering progresses with solemn steady pace into the quiet night and the consuming darkness beyond.

I am woken by the gossiping starlings. Eventually the pale thin light filters its way into the bedroom. All is still as the village dozes under an ancient spell until finally the spell is broken by the steady tapping of an early morning passerby. It is Manolo, otherwise known as “Gafas” for his thick bottle glass lenses. He has taken to walking with a long stick as he exercises his two small dogs each morning. I peer out at his receding figure. The stick tap taps and he resembles some blind mendicant heading out into the wilderness which now is the campo beyond the end of the village.

I take a stroll before breakfast up towards the spluttering spouts of the mina and past the burnt out almond grove which caught fire a Summer ago. The rain has encouraged the wild flowers. Bright yellow broom competes with the bleeding poppies for attention as the tangled black stems of the dead trees score patterns against the pallid sky. Then suddenly, like a small purple bruise against a wounded body, I spot a tiny hopeful flower winding its way upwards through the damaged carcass of its blackened host. New life supported by the quickened charred trellis of the old. 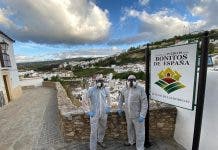 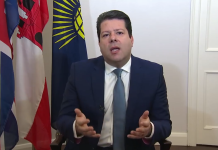