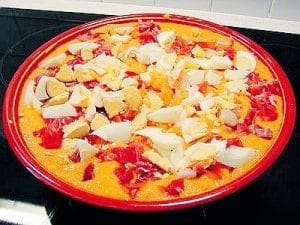 THEY snuck into Spain on a low-cost airline and slunk around Granada like most normal tourists.

And, best of all, they made a point of eating in a string of local restaurants, and trying the best of Andalucian cuisine.

After a morning’s sightseeing – and a visit to the cashpoint  – British Prime Minister David Cameron and wife Samantha lunched in celebrated Albaicin restaurant El Huerto de Juan Ranas, which sits opposite the Mirador de San Nicolas.

But there was no fanfare to mark their arrival.

Restaurant owner María Angustias del Castillo told the Olive Press: “They didn’t book a table, but just half an hour before they came their security guards warned us of their arrival.”

She revealed, that they had had ‘porra Antequerana’ for a starter and alpujarreño – a typical Granada fry up – as a main, all washed down with a glass of red wine for David and a rose for Samantha.

She added that the pair were friendly and attempted to speak Spanish. She said: “For dessert they asked for tiramisu.

“The couple were quiet and just enjoyed the wonderful views from here of the Alhambra.”

The Olive Press investigates the origins of Porra, a dish, which stands proudly aside from gazpacho and salmorejo, and offers a recipe…

A short history of Porra

Hailing from the Malaga town that bears its name – the starter dish of porra Antequerana can now be found across the province.

Similar to the iconic Andalucian dish of gazpacho, it is also very similar to the Cordoba dish known as salmorejo.

Slightly thicker than your average gazpacho it is more of a dip than a soup, and is often served as tapas or starter, accompanied with bread (despite having bread as a key ingredient).

The origins of the dish are believed to date back to the Roman period, although as tomatoes only arrived in Spain from the Americas at the start of the 16th century the original dish wasn’t red.

Nor, in fact was it cold, given the lack of refrigerators in the Middle Ages.

It was effectively a means by which peasants could make a meal using old bread, olive oil or vegetables, as well as bits of ham, hard-boiled eggs and other ingredients they had to hand that were then puréed using a mortar and pestle.

Over the years this evolved into a delicious cold soup.

But there are many variations, even around Antequera, with some recipes adding ingredients, in particular, adding tuna on the top.

How to put together a Porra

THE only thing to remember when making a porra is, regardless of what other ingredients you add, you must ensure the proportion of bread, tomatoes and oil are the same as in the standard recipe.

And whatever else you choose to leave out, do make sure you include some garlic even if it is only one clove.

1. Soak the breadcrumbs in water for a few minutes. If using tinned tomatoes, the juice is excellent for soaking.
2. Squeeze the breadcrumbs to extract as much liquid from them as you can and put them in a blender with the garlic. Blend for a few seconds to ensure that the garlic is finely chopped. (If you are feeling more traditional it is possible to mash the ingredients by hand).
3. Add the oil, paprika, tomatoes and vinegar or lemon juice. Blend thoroughly until the mixture is smooth and thick. Add salt to taste and chill briefly.
4. Meanwhile, chop the ham (quite finely) and egg (into smallish pieces).
5. Pour the porra mixture in small bowls and place the ham and eggs on top of it. Don’t mix them in.