AXARQUIA Rugby Club played host to a festival of rugby at the Fernando Hierro stadium on Saturday 7th May. Teams from Cordoba, Jaen, El Ejido, Motril and Malaga all arrived at the Axarquia Rugby Club to play in various competitions and to enjoy the great atmosphere of rugby, music, food and drink.

Axarquia Colts (U17s) opened the tournament with a 21-12 victory over Motril Rugby Club to earn a place in the final of their quadrangular tournament. Jaen Colts lost narrowly to the strong team of Cordoba, who went on to lift the trophy after they beat hosts Axarquia Rugby 12-5 in closely fought, physical game in the final. 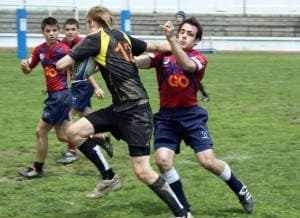 The Axarquia seniors finally kicked off their tournament in the late afternoon with a tough match against their rivals from El Ejido rugby club. El Ejido took an early 7-0 lead with a fantastic individual try from an interception and conversion. Axarquia fought back with a try of their own, and secured the victory with a penalty to win 8-7 to reach the final. Jaen and Cordoba fought out the other semi-final with Jaen running out the victors to set up a final clash with Axarquia Rugby Club. The seniors gained revenge for the U17s Colts defeat, beating their visitors in a tight, physical game 12-7, to become champions of the 5th Annual Quadrangular Tournament.

A club spokesman commented that this had been one of the best tournaments hosted at the Velez-Malaga stadium. It was well organised and extremely well attended with over 300 spectators and players there. For the first time, a well-stocked bar and merchandise stall ran out of supplies, generating much needed funds for the club’s coffers.

Next weekend, the seniors and Colts teams of Axarquia Rugby Club, play host to La Estacion rugby club from Seville. Entrance to watch the games is free, and there will be a refreshment stall selling drinks, food and club merchandise, so everyone is invited to come and support the club.

Training for Axarquia Rugby Club is held at the Fernando Hierro Stadium in Velez-Malaga every Tuesday and Thursday from 19.00 for the Juniors and 20.30 for the seniors ( all age groups welcome).