IT was two hours into the journey south and the kids were getting restless in the back. The iPod had run out of batteries and there was still an hour of driving to go.

There was only one solution… it was time for a game of ‘Spot the Donkey’.

It had soon become something of a theme of our journey south from Ronda to Essaouira, a spectacular 2000 kilometre round trip that incredibly took just under nine hours of driving each way.

The idea was to visit the charming seaside town of Essaouira, which I hadn’t visited for nearly 20 years, and to test the highly-rated Moroccan motorways in the process.

The main problem was going to be a five-year-old and a toddler in the back…. but I am pleased to report that they all passed with flying colours. And much of that was thanks to the donkeys!

Rather like Spain of 30 years ago, everyone in Morocco has a donkey or mule.

These wonderful animals are the chosen beast of burden, the multi-purpose tool for transportation and a regular fixture of the largely rural economy of Morocco, ploughing the fields and carrying all sorts of merchandise.

They line the streets, the fields and – luckily – also the main motorway south, the extremely well maintained and good value A1 toll road.

Our mission was to get to Essaouira as painlessly and cheaply as possible. We considered the plane from Malaga to Marrakech, but by the time we had factored a rental car into the equation, the cost was well over 1,000 euros.

Much better to take our own car, we figured, pay the 350 euro fee on the ferry and motor it south.

The best news is the cost of petrol, which weighed in at around 30 per cent cheaper than in Spain, not to mention the motorway tolls, which were under 50 euros return. And don’t forget you can still drive 120kp/h in Morocco!

Best of all, we could take as much stuff as we wanted, avoid the stresses of air travel and get to see some of the world’s best scenery as part of the bargain.

It is certainly a picturesque journey largely following Morocco’s western coastline and there are a string of pretty towns en-route, not to mention the important cities of Tangier and Rabat and perhaps, less so, Casablanca, if you fancy a spot of sightseeing.

It had been remarkably easy getting the FRS fast ferry from Tarifa to Tangier (they go every couple of hours and you get your passport stamped onboard) and, these days, it is so much easier bringing your own car.

Things have improved dramatically with the arrival in Tangier. While this used to be a fraught process as ‘officials’ vied for your custom with tussles, even punch ups between them, nowadays much of the flotsam and jetsam has been removed from the port.

It still pays to tip everyone – a five-euro note normally does the trick – and, above all, keep your sense of humour.

This time, within just 20 minutes we had got the forms stamped (most Spanish insurance policies include a ‘greencard’ for travel to Morocco) and were heading through Tangier’s southern suburbs.

We had decided to make two stop-offs en-route to our rented home in the heart of the Essaouira medina.

Breaking up the journey allowed us to visit two little-known beauty spots Moulay Bousselham and Oualidia and gave the kids a chance to let off steam.

We had arrived at our first port of call after about an hour of driving.

Turning off the motorway, we were soon weaving around the side of a huge lagoon, which is fast becoming known as one of Morocco’s best spots for birdwatching.

As well as a healthy population of flamingos, the stunning expanse which sits next to the small town of Moulay Bousselham, is full of rare waders, terns and enormous ibis.

While our first night’s accomodation was a bit rough and ready, its location by the water in its own tranquil grounds, made up for it.

We dined under the stars and the following morning hired a boat for 15 euros to putt putt around the lagoon to visit the allusive flamingos, who had alas decided to spend their day feeding in the most inaccessible part.

The kids loved it nonetheless, and by noon we were cheerfully off on the next leg of our journey past the sprawling slums of Casablanca, some irritating roadworks around Rabat, and the mother of all petrochemical plants at Douar Oulad.

Here we joined a smaller coastal road south to Oualidia, which held the biggest surprise of our holiday.

For not only is this one of the most beautiful seaside towns around, but it now has the most amazing boutique hotel.

With just a dozen rooms, the five-star La Sultana hotel sits in acres of grounds beside the protected estuary, has a beautiful underground spa fed with sea water and a legion of fawning staff that number around four to every guest.

Particularly commendable is its approach to sustainability with the architecture and landscaping having minimal impact on the environment and its clever use of grey water and sewage to irrigate its gardens. 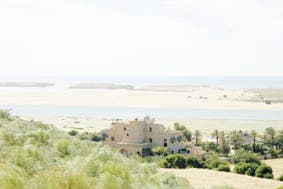 You really get a sense of nature here, whether strolling around the lagoon or just paddling around in the rock pools at low tide.

And best of all, for gourmets the hotel has its own oyster farm, not to mention a dozen tanks full of fresh seafood, from razor shells to crayfish and lobsters to spider crabs.

It is no surprise to learn that the king owns the neighbouring estate and with a rack rate of around 450 euros you’ll need a king’s ransom to stay here.

We could hardly bear to drag ourselves away, but thankfully the two hour drive south to Essaouira on the N1 was to prove to be the most beautiful part of the journey.

Why nobody seems to have set up a hotel here – around Khemis Takate, for example – is a mystery, as this is truly lovely scenery, hardly mentioned in any guidebook.

By 6pm we were entering the fabled walled city of Essaouira, a southern gem, famous for its stylish hotels and fishing port.

Suddenly we had found the true flavour of Morocco. A bustling market town, our garret for the weekend was right in the heart of the medina, where donkeys were two a penny and, at first glance, chaos seemed to prevail.

Staying in a wonderful riad Dar Beida, owned by a former antiques dealer from Islington, we had the perfect place to seek solace from the scrum outside.

Beautifully restored, its ancient arches were complimented with a tasteful array of antiques and furniture and you got a real sense of privilege staying there.

Not even a bomb going off in Marrakech could put a dampener on our stay, as we strolled around the amazing port, choosing fish for supper, with a friend, a chef, who raved about the quality.

The following day we took a walk up the beach towards Diabat, where legend has it Jimi Hendrix had been suitably inspired to write his hit Castles in the Sand.

It was certainly an atmospheric place, and the kids loved exploring a string of old fortifications hidden in the dunes, plus the famous ruined castle, now literally crumbling into the sand on the shoreline.

We decided to make a beeline all the way back to Tangier for the return journey, stopping just once for lunch at a surprisingly good motorway service station.

The ‘Spot the Donkey’ game came in very useful, and for our last night we stayed in one of the most historic hotels in Morocco, the El Minzah, where countless celebrities including Rock Hudson, Winston Churchill and Rita Hayworth once stayed.

A grand old dame, it was in the perfect location above the medina and had a splendid restaurant, replete with belly dancer, appropriate for our last night in Morocco.

All in all it was a road trip to remember.