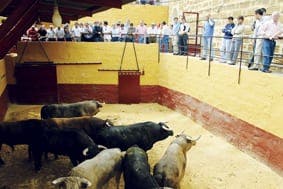 At 11am, with the bulls safely corraled at the back of the ring, the manager and team of the three bullfighters – Javier Conde, Salvador Vega and Angel Luis Carmona – closely study the animals that have been brought in the previous day from a farm, owned by the Domecq family in Extremadura.

The size, gait and movement of each bull is checked, with two of the eight bulls ultimately being excluded from that evening’s spectacle. 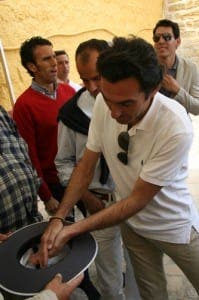 At 12.30pm, with the teams coming to a consensus on which are the best bulls, the three fairest pairings are scribbled onto rizla papers, which are tightly screwed up and popped into a hat.

The managers then take it in turns to pick them with everything carefully monitored and noted by a local vet and policeman.

Finally each bull is enticed into its own holding pen, after which the following night’s batch is brought in by lorry. 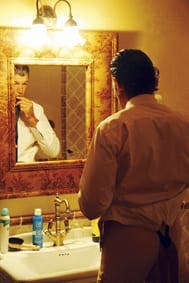 By 2.30pm the teams are back at their hotel, the La Casona de Calderon, having a light lunch of salad and pasta, before heading up to their rooms at 3.45pm to start preparing for the main event.

A slow and careful process, mired in tradition, their 2,000 euro suits – or trajes de luz – are made to measure and everything from their shoes to their hair pins are religiously cleaned and laid out on chairs.

A heavily superstitious time, everything must always be done in the same order, ties are kissed and nothing must be touched after locking the room.

Finally, a customary hug before heading for the ring at 5pm. 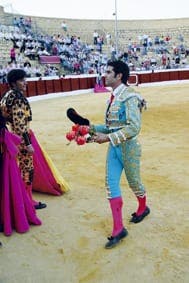 GOOD DAY AT THE OFFICE:

At 8pm, the team Isaac, Raul and Miguel pose with their boss, Salvador Vega.

He is one of Spain’s top bullfighters, contracted for between 40 and 60 fights a year.

His team consists of a dozen employees, who all rely on the work to feed their families. “It’s tough and the recession has really affected our livelihood,” says manager Juan Miguel. “But we will keep soldiering on.”

A slick, professional operation, the team receive warm applause for two perfect dispatches and leave for their hotel at 9pm.