DESPITE growing awareness of green issues in southern Spain, many sustainable traditions face a difficult future as they compete against more cost-effective methods and newer, more exciting ways to earn money.

Here, in the run up to the launch of our annual Green Guide (http://www.greenguidespain.com/), the Olive Press looks at some of the Andalucian traditions that could disappear forever, and a few that are making a brave fightback…

Buzzing back to life: Beekeeping

Albert Einstein is rumoured to have said: ‘If the bee disappeared off the surface of the globe then man would only have four years of life’.

This is not entirely the case, according to the boss of Andalucia’s brand new honey museum in Colmenar. “The four years bit isn’t quite true, but bees are definitely important,” explains director Fernando de Miguel Rey.

The word colmenar literally means ‘beehive’ so it is no surprise to learn that the small mountain town 30km north of Malaga has a long beekeeping tradition.

But sadly, due to many reasons, the numbers of local beekeepers has dwindled to just 10 in recent years.

It is for this reason, that the town recently got a 355,000 euro grant to open its first honey museum to raise public awareness of the importance of beekeeping.

The museum is also hoping to revive the tradition, dating back to the 18th century.

Thanks to a new grant introduced last month, budding beekeepers around Andalucia are to be given money to keep up the business and ‘improve commercialisation of production’.

“They certainly need to do something as sadly there are not as many young people today showing an interest,” explains Rey.

“It is something that families pass on from generation to generation and sadly the skills are being lost.”

The main job of the beekeeper is to look after the storage of the honey and extract it when it reaches its peak.

The process involves removing the wax and putting the combs into an extractor where the centrifugal forces extract the honey.

The earliest known record of humans harvesting honey is from Spain, coincidentally, at La Cueva de la Araña in Bicorp, Valencia over 9,000 years ago.

A rock painting shows a woman and boy, hanging from a rope with a basket, collecting honey with a rock.

Rey explained: “We have more modern technology to help these days, but the process is basically the same, the honey hasn’t changed for thousands of years, and you still get stung.”

Today nearly 80 per cent of all honey sold in Europe comes from Spain – where there are around 26,000 beekeepers, of which 6,000 are professional.

Ironically, 80 per cent of the honey consumed in Spain actually comes from China.

“The Spanish tend to go for price over quality,” quipped Rey. “That has got to change.”

Invented by the Phoenicians: The Almadraba fishing technique 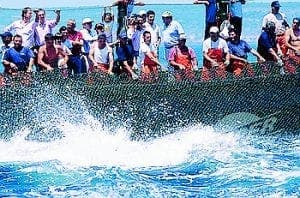 Dating back to Phoenician times, the Almadraba fishing technique uses a maze of nets leading to a central pool (or copo), where the prized Atlantic bluefin tuna are channelled.

The maze – which is only found in the Costa de la Luz towns of Tarifa, Cadiz, Rota, Zahara, Conil, Chiclana and Barbate – uses just two net lines (raveras), one connected to the shore and the other secured in deeper water.

The process, which is supported by green groups as it is carefully regulated with quotas, takes place in early summer and autumn each year, coinciding with tuna migrations from the Atlantic to lay eggs in the Mediterranean.

The majority of bluefin are usually frozen and flown to auction in Japan where they are highly prized – one large specimen sold for a record 278,000 euros in January.

However, the whole industry could soon disappear as fleets of factory ships, using sonar and spotter planes, continue to overfish the region, leading to a dramatic decline in tuna stocks.

Cheese-making is a long-standing tradition in Andalucia and the leading region in Spain for its production.

There are many cheese-making cooperatives in the region, including Agasur, Payoyo and Cosevilla, which continue practicing the sustainable process. 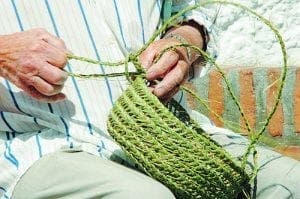 The esparto grass that grows on mountain slopes around Andalucia was once the main source of income for many families, particularly in the Sierra de las Nieves and Serrania de Ronda.

Dividing the manual task between men and women (the men would collect the grass and the women would weave it) they were able to make countless everyday items to sell.

Baskets are the most common items associated with this tradition, but skilled artisans also use this natural fibre to create rope, mats, cradles, bottle holders and woven strips for hats and bags.

In Igualeja a woman’s cooperative has been formed to keep this tradition alive. After studying basket weaving for a year, a group of women launched the cooperative, backed by the Town Hall, and now have a museum where they sell the pieces they make.

Grazalema blankets were exported to Europe and South America until the industry suffered a rapid decline in the 1870s due to the onset of the industrial revolution.

However, an increase in demand for natural products in recent years has helped a recent resurgence for the hand-crafted textiles.

The wool is classified before being washed, hung to dry, spun and weaved. The loose threads are then hand-twisted to make the fringes, which are characteristic of the stunning blankets. 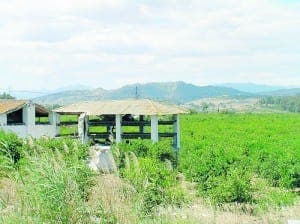 Cascareros’ are unique to the Guadalhorce Valley.

They were traditionally used for drying citrus fruit peels to be used in the manufacture of gunpowder, confectioneries and making essences.

The agricultural-style constructions are now largely redundant due to the advancement of new technologies but the town of Alora is in the process of building a permanent reminder of the tradition at the entrance to the town.

The water of life: Irrigation by acequias

Natural irrigation systems were first introduced by the Romans and ingenious Moors, and fortunately many so called ‘acequias’ are still running to this day.

A fabulous way to irrigate crops through the harsh summers, so called cooperatives of ‘regantes’ each get set slots in which they can use the water through the week. Going back centuries, these groups are self-financing and play an integral role in protecting one of Andalucia’s oldest traditions. 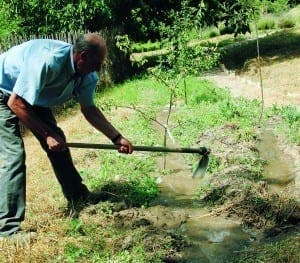 With almost all its original machinery still intact, the milling equipment of the Molino Museo in Valdepenas offers visitors a window into the past.

Dating back to the 16th century, it is still able to grind wheat into flour to make bread. “It’s almost unique in Spain,” explains historian Juan Infante.