WHEN the phone rings at Ivo Roncadi’s restaurant La Cancha II in August it is anyone’s guess who the booking will be for.

In a stunning setting inside one of Europe’s most exclusive private polo grounds, the stylish eaterie is understandably full most nights of the summer.

With a backdrop of oleander, pines and perfectly clipped lawns, it is the perfect escape for Europe’s wealthiest and most famous families.

With recent diners including the Duchess of York and Spain’s top bullfighter El Juli, it is perhaps no surprise then, when during an interview, a member of the Cartier family rings for a table for seven that night.

“They are lucky we have space as we are already fully booked for most of the week,” explains Italian Ivo, who has been managing the restaurant inside the Ayala polo club since leaving his last job in the Lake District a year ago.

“It doesn’t matter who they are. If we have no space they can’t have a table… even Prince Charles.”

The idea that Britain’s future king might actually want a table at this local hidden inland from the Costa del Sol is actually not so far fetched.

A world of privilege, where Russian oligarchs sip cocktails with British debutantes

Prince Charles has been an occasional visitor to the resort over the last few decades, a fact verified by a number of evocative snapshots, one in particular showing the UK’s future monarch accepting a polo prize from a grande dame of Spain’s leading Domecq sherry family.

It is a photo that well sums up the millionaires’ enclave, which is one of the few places in Andalucia known to have had its own fox hunts.

Spain’s largest private estate (all 4,400 acres) is well used to seeing a phallanx of British royals (Prince Andrew, the Duchess of York, Prince William and Harry and princesses Eugenie and Beatrice are regulars) blazing a trail through its security gates, manned 24 hours a day.

This is a world of privilege, where Russian oligarchs sip cocktails with British debutantes, Argentinian polo players hang out with German ad men and London account managers take lunch with American media moguls.

But you are just as likely to rub shoulders with celebrities, including Rod Stewart, Mariah Carey and Duffy, as well as Glenn Hoddle, Eddie Jordan and Mike Rutherford of Genesis who all have homes here.

Unlike, its near neighbour of Puerto Banus, where ostentation knows no bounds, in Sotogrande – the veritable Sandbanks of Andalucia – people actively dress down.

This is an international scene, understated and mostly without a need to show off its wealth.

You don’t see Rolex watches and Ferraris by the minute, yet plenty of people have yachts, which slide in and out of its marinas at dawn and dusk. 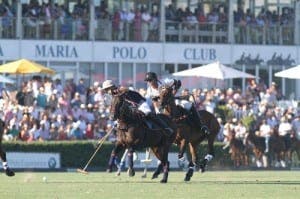 “It is an incredibly privileged place, full of wealth, but it is not so showy,” says Suzi Langley, who grew up in ‘Soto’ there and attended its celebrated Sotogrande private school.

“It is a great place to bring up a family, as it is extremely safe and there are loads of sports on offer, such as polo, tennis, golf and football.”

Argentinian Valeria Alfie agrees: “Sotogrande is a place for world travellers, who mostly have the best of everything. People don’t come here to show off their money. These are low profile, understated people, who don’t wear Prada or gold Rolex’s.”

But, that is not to say they can’t afford it.

This is, after all, where, according to the Sunday Times, Spain’s most expensive real estate can be found.

In particular is one house La Manzana, owned by the aforementioned Cartier family, that a few years ago went on the market for a whopping 24 million euros.

More of a small palace than a villa, it was described by local agents as ‘Andalucian neo-Palladian with a hint of Mudejar’, but really was just, well, basically large.

Set in five acres and taking up seven plots of the estate, the house counted ten bedrooms, a gym, walk-in safe, not to mention a sauna, staff quarters and a 16m-long infinity swimming pool.

The sort of place the Great Gatsby would have bought and holed up in, it looks more like a hotel than a private property.

The childrens’ Wendy house in the garden looks more expensive than the average Fuengirola apartment.

While things have generally now dropped in price a little (perhaps as much as 40 per cent, according to some local agents), the average home in Sotogrande is still weighing in at around 1.5million euros.

It is for this reason that you get a lot of high powered businessmen, celebrities and sportsmen buying in the area.

There are certainly plenty of English and Irish footballers buying in the area, including Shay Given, Glen Johnson and former England manager Glenn Hoddle.

Unsurprisingly, with its connections to golf and polo, the place counts former roving UK trade ambassador Prince Andrew as a regular visitor.

A frequent summer tourist, along with his ex-wife Fergie, the Duchess of York, who normally spends a month in the resort with her two daughters Beatrice and Eugenie.

And, of course, one must not forget the princes Wills and Harry, who have often taken a turn on the green baize of the Santa Maria polo club, now said to be one of the best polo clubs in Europe, with around a dozen pitches.

Sandwiched between the Rock of Gibraltar and the Sierra de Almenara, it was a real masterstroke to set this millionaire’s playground here.

Sotogrande’s origins started with the dream of a millionaire businessman Colonel Joseph McMicking, who “wanted to build Paradise”. 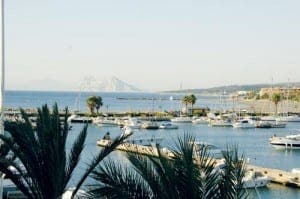 He sent his Spanish nephew Enrique Zobel to track down the perfect location and eventually managed to secure five adjoining estates fronting the Mediterranean which, rapidly amalgamated, became the basis of Sotogrande.

It was before the advent of mass tourism and land along the Costa del Sol was seen as cheap, unproductive land that could generally be acquired for next to nothing.

They drafted in one of the world’s best known course designers and designed what is now known as the ‘Sotogrande old course’.

Employing the services of the well connected society lady Carmen Guerrendiain, formerly of Madrid’s Ritz hotel, it had soon become one of Europe’s hippest places to invest in.

Further golf courses followed fast – there are now five – and by 1985 the resort also counted a tennis club, croquet club, not to mention polo, sailing, wind-surfing and beach clubs, as well as stables for 200 horses.

McMicking’s paradise was coming into effect.

The infrastructure certainly seems to have held up well. The almost unique development, now known as a EUC (Entidad Urbanistica de Conservacion), has quite a few more homes, but it still feels low density and privileged.

There are those, of course, who argue that Sotogrande is a false paradise. Divorced from real Spain, with no real culture, it’s a make-believe world for the idle rich and golfing bores.

Novelist JG Ballard was anything but flattering about the resort. In his book Cocaine Nights, which is said to be set inside Sotogrande, he describes it as ‘a town without either centre or suburbs… little more than a dispersal ground for golf courses and swimming pools.’

And Yes, there certainly are plenty of pools and golf courses here.

But 16-metre infinity pools and a round at Valderrama golf course sure beats hanging out with tattooed timeshare touts and pie-eating footie fans just half an hour up the coast.