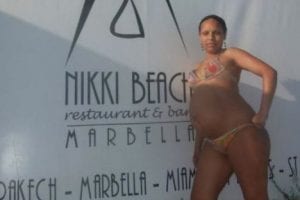 A MEMBER of the Italian Mafia – who had been on the run for almost 10 years – has been arrested in Marbella after his ‘stupid’ girlfriend posted pictures of the couple on Facebook.

One of Italy’s most-wanted, Salvatore D’Avino, 39, was caught out after detectives spotted photos on the social networking site of his pregnant girlfriend Brada Hint, 31, standing in front of the upmarket Nikki Beach Club.

Italian police alerted the Spanish authorities who then traced the couple to their Costa del Sol hideout and arrested D’Avino who is said to be a member of the Giuliano clan, of the notorious Camorra mafia in Naples.

He was listed on the Italian police’s top 100 most wanted after police issued two arrest warrants for D’Avino in 2003 and 2007 on drug trafficking and mafia charges.

D’Avino – who was believed to have been hiding in Morocco for years – is also accused of being part of a plot to flood Marbella with more than 250,000 Ecstasy tablets.

Marshall Angelo Mazzagatti, of the Naples police who led the operation said: “He couldn’t believe it when police arrived and arrested him. He thought after nearly a decade on the run he was home free.

“When he asked how we had found him and we told him he was not at all happy with his girlfriend who is heavily pregnant and about to give birth.

“When we saw the pictures on Facebook we could not believe his girlfriend had been so stupid. It was very easy to track them down as she was stood in front of a restaurant sign in Marbella.”

D’Avino now faces up to 20 years in prison.