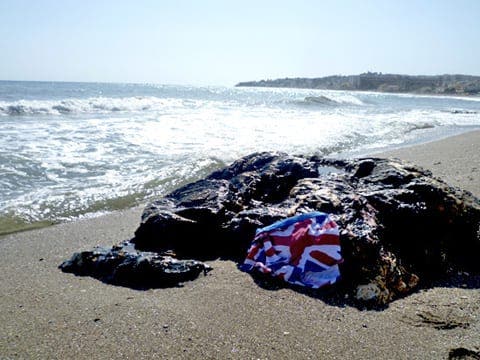 For his first fear-inducing feat, ‘The Mad Dog’ goes undercover at a Spanish nudist resort.

EVER since an incident back in 1990, the thought of naturism has given me the willies. During a routine school swimming trip, the class clown decided to whip my Speedos down – exposing my 10-year-old todger to a sea of giggling schoolgirls. For the next 12 months – I was referred to as “Lunch Box” by classmates, kids from other schools and even a creepy caretaker…. yikes!!!

For the next two decades, I’ve carried this memory around like an iron armband. Now, however, aged 30 and bigger in all departments…. I’ve decided to finally exercise this demon by stripping off in public.

Back in Blighty, flashing your privates at the seaside is bound to result in one of two things: 1) pneumonia; 2) prison. In Spain, however, the natives are remarkably relaxed about nudity, especially for a country dubbed ‘profoundly Catholic’ by the Pope.

From Barinatxe in the Basque Country, to Charco del Palo in the Canaries, Spain is brimming with clothes-free beaches. However, as a recently adopted Andalucían, I felt compelled to complete this dare in the Costa del Sol.

So, it’s 1pm on a Sunday afternoon and I’ve just rocked up to a secluded 500-metre stretch of sandy coastline. Despite being a ‘Mad Dog’ challenge, I’ve persuaded the missus to come along, partly for moral support, and partly to avoid looking sinister.

Immediately after the Naturista sign, you are met by an army of nudes. And while nobody is star-jumping sandcastles or lap-dancing for lifeguards, I can’t help but imagine black-clad widows at nearby churches, clutching their rosary beads and praying for a tidal wave.

To my left, a German bloke, wearing nothing but a grin, is trying to round up badminton players. Although racket-less, there’s no way of avoiding his shuttlecock.

Realising that we’re the only clothed people around, I suddenly feel overdressed. It doesn’t help that I’m being glared at by a grumpy, leather-skinned Spanish woman with breasts so saggy, Malaga Council could save a fortune on street-sweeping. Eager not to enrage this ‘Queen of Nudes’, I decided to disrobe.

But how best to do it? Do I hide it with a towel and reveal gradually? What to flash first… buttocks or crotch? Then, I decide ‘What the Hell?’ and yank my pants down like a man possessed.

Thankfully, nothing major happened. The sun kept shining, the badminton match carried on as normal, and the ‘Queen of Nudes’ continued to gawp. Standing there, hands on hips, I felt like a cross between a Roman statue and Borat… minus his mankini!

With my point now made (quite literally), I sat down and worked on my all-over tan. All around us, people were slapping on sun cream and talking gobbledy-gook. Then, somewhere in the distance, I could just about make out a West Country accent. In rustic Exeter tones, I overheard a bare bumpkin lecturing a young couple about carrots and vegetable patches – you couldn’t make it up! With my sense of escapsim shattered, I decided to hit the water.

Although I’d recommend skinny-dipping to anyone – emerging from the sea afterwards, is an entirely different animal. Picture the scene, one minute you’re bobbing along like Adam and Eve, and the next, the eyes of the entire beach are fixed on your dripping-wet dangly bits! Whereas my wife managed to pull off the sexy Ursula Andres look, my beach landing was more Free Willy.

Back at our towels, I noticed a George Michael-lookalike pawing at a melon. In mischievous mood, we decided to seek out more undressed celebs. By the time we’d traipsed back to the bus stop, we’d seen a mooning Maria Sharapova, a squatting Salmon Rushdie and a nude Jude Law. Inspired, I’m thinking of pitching the ‘Nuddy Doubles’ concept to Channel Five.

Despite all the scare stories, our day at the nude beach had been a fun, different and liberating experience. I’d seen a whole new, paradoxical side of Spain, where nuns and bums shared the same seafront. Baring all hadn’t felt scary or deprived, but I still said a secret Hail Mary when I returned back home.

One thing’s for sure, I certainly won’t be having anymore nightmares about that darn school pool. I did wake up screaming that night, but that was just the after-effects of 70% minor burns. As I smothered my blistering bottom with aftersun, I decided to put the ceremonial trunk-burn on hold.

Who knows, I may let sand get in strange places again, but for now, I’ll leave naturism to the professionals. And if anyone calls me a coward, I’ll simply turn the other cheek ; )