I AM sitting on the beach watching my children play with a bucket and spade, while looking out across, well, row upon row of olive trees to be exact.

For we are in Cordoba province, beside Andalucia’s largest man-made reservoir with the Mediterranean about an hour to the south.

The place is Iznajar – the gateway to the stunning Subbetica region – and a true picture postcard town, easily rivalling Ronda or Vejer de la Frontera say, for scenery.

Peace personified, Iznajar sits on a rocky outcrop that erupts out of the lake, which is some 30kms in length and straddles the three provinces of Cordoba, Malaga and Granada.

There is hardly a house, let alone block of flats or golf course, to ruin the view towards a backdrop of soaring distant mountains.

Known as the Mirador of the River Genil valley, it is hardly surprising then that Iznajar – and the Subbetica region as a whole – is fast becoming one of those super-cool, secret destinations to name drop at your next dinner party.

It certainly seems to be the case, sitting down to a candlelit dinner in the pebbled courtyard of the atmospheric hotel Cortijo La Haza in the rolling hinterland near the town.

But it is not the superb restoration of this 250-year-old farmhouse, nor the delicious fish stew or meatloaf cooked to a tee by chef and owner Belgian Patriek Defauw, that comes as the biggest surprise.

The thing that really catches the eye is the clientèle, who include among the Monday night throng, two British judges from Leeds.

Regular visitors to the area, where they both have holiday homes, they have grown to love its haunting landscape and fascinating historic towns. “It is a great spot to get away from the Rat Race and we love the countryside and peace,” explains Judge Mark, who prefers not to give his surname. “We are slowly getting to know the Subbetica and love what we have found.”

Other interesting residents include the former captain of Wasps rugby team, who once played for the All Blacks, as well as Peter Reynolds, a former British Defence Attachee in Argentina.

“We are absolutely mountain people but we like the sea as well, so looking over the lake is a major bonus,” explained the former Royal Marine, who has lived with his wife yoga teacher Marilyn near Iznajar for seven years.

Iznajar is a typical town of the area, which is full of Moorish castles and Roman remains.

Originally a prehistoric settlement, its fortunes changed in the 7th Century when Arab settlers built a castle on the promentary and named it Hins Ashar.

It is a wonderful place to visit, particularly in the evening, as the hot Andalucian sun starts to drop its last rays giving an ethereal light to the palm tree and the historic houses around the old castle.

The locals drift to and fro, many dropping into the impressive Church of Santiago, which was built in the 17th Century and has a beautiful baroque chapel behind the altar.

On leaving the church you stroll past a small square called the Patio de las Comedias which lends credence to the fact that back in Arabic days, Iznajar had a thriving theatre culture.

It is a pretty site, beautifully kept by its proud neighbours, who bedeck its walls with blue flower pots full of geraniums.

It is a similar, indeed much magnified story in the pretty Barrio de la Villa in the heart of Priego de Cordoba, a lovely 30 minute drive north of Iznajar through rolling olive groves and past romantic ruined farmhouses.

Here, in the maze of cobbled streets, dating back to Moorish times, you will find the house of Adoracion Montecille, 74, who moved here from Madrid a decade ago.

Her chain of 200 plant pots spreads organically some 50 metres up the side wall of the narrow cobbled street where she lives.

With dozens of different types of geraniums, in a profusion of colours, it has become something of an obsession to the pensioner, who religiously waters and prunes them every evening through the heat of the summer. 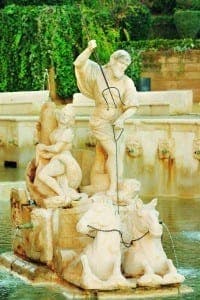 But that is not all. Since moving back to Priego – known as the ´city of water´ – and where she was born in the 1930s, Adoracion has also become as communally minded as the rest of the Barrio.

Spic and span, not thanks to the local council, but thanks to the army of old age sweepers, who take out their brooms and sweep their area at sunset in a communal dedication rarely seen these days.

This is typical of the Cordoban love of patios and the narrow streets of the charming car-free barrio they inhabit.

It is all too obvious strolling around the warren of white-washed houses, with its interesting nooks and crannies, such as the charming Plazuela de San Antonio. Little changed since Moorish times, it is fringed by the fabulous Balcon de Adarve walkway, offering spectacular views and three deliciously fresh drinking fountains – hence the name ‘city of water’.

Capital of the Subbetica, Priego is a great place to spend a weekend. Sitting on the edge of the 32,000-hectare Subbetica Natural Park, it has a contented self-contained air about it.

And, incredibly, despite its amazing scenery and abundance of stunning churches and architecture, it remains an overwhelmingly Spanish town, with few expats living in the area and tourists still something of a sideshow, apart from in May when they decend for the celebrated Domingos de Mayo festival. Declared of national touristic importance, these ancient processions, which take place each Sunday, are stunning and first began in 1642.

Priego itself first became known in Roman times as the cattle town of Rueda, which came under the jurisdiction of nearby Carcabuey, itself an attractive castle-topped settlement, well worth a visit.

Celebrated since Roman times, the olive oil in Priego is the best in Spain

While nowadays few cows wander the area, it has become well known for its goats, and in particular olive oil.

Celebrated since Roman times – a fact now proved by the discovery of a wealthy merchant’s house in Almedinilla – the Subbetica region has three of Spain’s top appelations for oil, the denominacion de origines (of DO’s) of Lucena, Priego and Baena.

One olive oil producer Benito Serrano, from Priego, explains: “The olive oil here in Priego is the best in Spain. It is clean and fruity and great with bread and salads.”

A brilliant way to try the mixture of rich and complex oils – many of them 100 per cent organic – is at the HQ of award-winning oil maker Vizcantar.

Here, owner Fermin can organise a fantastic value ‘tasting’ session, replete with tapas, wine and water, for a bargain 20 euros a couple.

A passionate, well travelled man, his family have made olive oil for decades and one of his fincas, near the town of Almedinilla, counts no less than five so-called ‘milenario’ trees, each of them over 1000 years old.

These stunning trees, which can be visited by special request, still incredibly bear fruit each year and Fermin is currently in the process of creating a special brand of oil just made from the five trees. “There won’t be much oil,” he explains. “But it will be among the world’s best and will certainly have its own unique selling point.”

Other notable produce is the fabulous goats cheese made around Zuheros, while in Lucena you must stop to try the fabulously flinty sherry-like wines of Torres Burgos.

Part of the Montilla-Moriles denominacion, the huge bodega in the centre of town is difficult to miss and counts thousands of oak barrels of Palomino and Pedro Ximenez wines, blended in the classic ‘solera’ system, so typical of the sherries of Jerez.

Best of all, is its wonderful Amontillado, which effectively means ‘of Montilla’, a fabulously nutty, straw-coloured blend over 100 years in age, which is now being snapped up by the Chinese, no less, for over 100 euros a bottle.

As they only produce 3000 bottles a year and the Chinese are importing the whole lot, it is creating a very exclusive market over there.

There were, as it happens, a few bottles for sale at the bodega, but I opted for a mixed case of other chestnuts, all of them coming in at under a fiver. Viva la Subbetica.