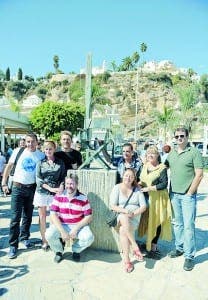 LOCAL residents in Nerja could hardly believe their eyes as the actors of one of Spain’s most famous soap operas returned to their streets once more.

The cast from Verano Azul (Blue Summer) were back to celebrate the 30th anniversary of the show that catapulted the resort town onto the world stage.

But perhaps more crucially it portrayed a liberated nation in a post-Franco Spain when Spain’s economy was taking off and everybody had jobs.

It transformed the local economy and practically everybody in the town either worked as an extra or a helper.

Relating the holiday adventures of seven children aged nine to 17, Verano Azul was phenomenally successful being watched by 34 million Spaniards.

While it never reached the UK, it was sold to Argentina, Portugal, Poland and many other countries.

It is replayed here almost every year and thousands have visited Nerja as a result. To mark the first televised show in 1981, Nerja invited the cast back for a day of celebrations.

They visited the fishing boat of Chanquete, the wise old fisherman beloved by the kids, and lunched on Ayo’s paella on Burriana beach, just like the old days.

A Nerja street is named after Antonio Ferrándiz, the actor who played Chanquete, and you’ll find the name ‘Verano Azul’ on everything from a restaurant to a cocktail.