Agatha Christie called it ‘banting’; the Americans call it ‘dieting’. In our Spanish mountain village, the new name for successful weight loss is ‘cryptosporidiosis’. In three weeks, I’ve lost 5kg. and gone down two dress sizes.

… AND NOT A DROP TO DRINK

“Water, water everywhere,” said Samuel Taylor Coleridge. This is certainly true in Benoaján and Montejaque – especially now that winter is fast approaching and we’re experiencing the usual amount of precipitation.

In the village of Montejaque, we have access to several free-flowing water sources, including three taps, opposite the aptly named ‘Fountain Supermarket’, and the Lavandería (wash house) on the main street. Since local tap water is highly chlorinated and full of lime (we’re constantly de-scaling the kettle and the iron), we’ve been filling, from the local fountain, the 20-litre container of our hot-and-cold water dispenser. The spring water is wonderful to drink… cold and fresh and as good as Vichy, but without the bubbles or the price!

At the beginning of October, I woke up one morning with cramps in my stomach. As this part of my anatomy is the most susceptible to hyperacidity, heartburn and hernias, I took my standby remedy of Esomeprazole and over-the-counter antacids for nearly a week, with not much relief from my symptoms. I then visited the pharmacist and bought some Salvacolina for diarrhoea … which I subsequently followed, two days’ later, with a natural laxative for constipation!

The following week, I did some research on ‘Google’ and decided I maybe had Helicobacter pylori, so I started taking a course of the antibiotic Amoxicillin. After a week of this, all I had was a yeast infection, and still not much relief from the stomach cramps. Back to ‘Google’, and the determination that I obviously had ‘IBS’, or Irritable Bowel Syndrome. The relief for this was recommended as a combination of Buscopan (for the stomach cramps) plus Esomeprazole. Finally, I had a little relief.

I then started to hear about the doctor’s waiting room being full of patients complaining of stomach cramps, diarrhoea, loss of appetite, etc. Did they all have IBS?

It turns out that our delicious spring water, sourced mainly from the village of Benoaján, has been affected by a parasite. A couple of local home-owners, who visited for a week, were unfortunately affected by stomach problems during their visit, and took a sample of our water back to the U.K. to have it analysed. (In these days of not being allowed to take more than 100ml of liquid onto a ‘plane, it was obviously a small sample). The analysis showed that the spring water contained the bacteria Cryptosporidium.
The following information was obtained from the website http://www.cdc.gov/parasites/crypto/disease.html …

“Symptoms of cryptosporidiosis generally begin 2 to 10 days (average 7 days) after becoming infected with the parasite. The most common symptom of cryptosporidiosis is watery diarrhoea. Other symptoms include: Stomach cramps or pain; Dehydration; Nausea; Vomiting; Fever; Weight loss. Some people with Crypto will have no symptoms at all.

Symptoms usually last about 1 to 2 weeks (with a range of a few days to 4 or more weeks) in persons with healthy immune systems. Occasionally, people may experience a recurrence of symptoms after a brief period of recovery before the illness ends. Symptoms can come and go for up to 30 days.

While the small intestine is the site most commonly affected, Cryptosporidium infections could possibly affect other areas of the digestive tract or the respiratory tract.”

Reading this information on ‘Google’ was finally my “Eureka!”moment. At last I had a reason for all of my symptoms … and an even better reason to drink only the local Rioja and no more water. 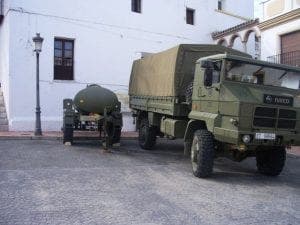 The Ayuntamientos (town halls) of the villages of Benoaján and Montejaque have been very proactive in dealing with the situation. We both have bowsers located in or near the village square, from which the locals can draw water. These mobile water tankers are delivered on an as-needed basis by the local army. (A friend laughingly suggested that, instead of Cryptosporidium, maybe we will now get Legionnaire’s Disease?!)

Until the reason for the presence of the bacteria can be determined, and it has been eradicated from our water supply, I will stick to the Rioja … and perhaps send my bill for clothing alterations to the local town hall.