Mantilla: a lace or silk shawl worn over the head and shoulders, often over a high comb.

Peineta: (1) a large comb, with a convex body and set of prongs, used to hold up the mantilla; (2) when being fitted, an instrument of torture for women with short, fine hair.

In an unprecedented move, this year’s five-day August feria in Montejaque was planned by the employees of the Ayuntamiento (Town Hall) … not, as tradition dictates, by a group of nominated ‘mayordomas’ (stewards).

These mayordomas (elected on the last day of the feria) are responsible for organising the fund-raising and entertainment for the following year. They also lead the procession through the village on the first day of the feria. But this year there were no stewards … so a plea went out to the residents for volunteers to head the parade.

On the day before the procession, I was asked if I would like to take part.

“Why not?” I cheerfully replied.

If I had known the pain and patience I would require, perhaps I would not have been so keen to ‘step up to the plate’.

The procession was due to start at 20:30h … it would involve the six volunteer mayordomas, the ‘ten-ton’ Virgen de la Escarihuela, the Montejaque village band, and as many of the residents of the village who were willing to follow along on the three-kilometre journey.

At 19:00h I turned up to have the peineta and mantilla fitted onto my head. There was much tutting and disappointment expressed over my short, fine hair, which certainly could not be formed into a ‘bun’. It required a lot of gel, hairspray, pins and combs to fit the peineta onto a small ponytail at the back of my head, and the mantilla was pinned on afterwards. I then stepped into my dress (I’d made sure beforehand that I could do so, as my arms weren’t long enough to lift it over the top of the impressive head-gear). The mantilla was then attached to my shoulder straps, in the belief that the head-dress would not fall off during the walk through the village … or would only rip my (rather expensive) dress if it did so.

Just after 20:30h, we six volunteer mayordomas gathered in the church; we were each given a heavy brass rod/mace to carry, and got ready to lead out the four men and two women who had hoisted the Virgen onto their shoulders. (Actually, the two women were underneath the Virgen, and it was nowhere close to their shoulders; they were resting her weight on their upturned palms).

I was in the front row of the procession because we wanted to evenly distribute the colours of our mantillas – two white and four black. Unfortunately, neither of my front-row partners, Adela Mariscal Galeano (also in white) and Leticia Salvago (in black) had ever done this before, either. It took us at least half a kilometre to get the speed right … we were going either too fast or too slow, and we often didn’t notice that the whole parade behind us had stopped, to give the Virgen bearers a rest. 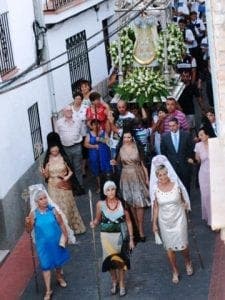 Walking alongside the Virgen were several people with forked staffs in their hands … and it was in the fork of these staffs that the bearers got to set down their heavy load. About halfway along the route, it got easier to judge when it was rest-time … because several householders had put out their dining table in the middle of the street, on which the Virgen could be set down. When we saw a table coming up, Adela, Leticia and I knew it was going to be stopping time again.

I very much appreciated these rest-stops: they gave me the opportunity to stick back into my hair several of the combs and pins that were holding in the peineta; I was shedding combs every 200 metres or so, and the mayor was quietly picking them up and handing them back to me. Occasionally, the wind would gust, and Leticia and I would then walk backwards until it dropped … otherwise, our head-gear could possibly soon be adorning the mayor or one of the Virgen bearers.

One-and-a-half hours after we left the church, we returned to it, with rather sore feet (although the shoes of the mayor’s wife, Maria del Mar, had much higher heels than mine, so I really shouldn’t complain). I think the back of my head was a little more sore than the soles of my feet, anyway: although I’ve not yet seen photos to prove it, there is no doubt that my adornment was lopsided by this time – because three women outside the church immediately set upon me to try and straighten it, causing the remaining combs to fall out and the pins to rip at the shoulders of my dress. The whole ensemble came away in their hands, so they hastily draped just the mantilla over my head (to cover up my pathetic ponytail) and handed me back the peineta, combs and pins.

It was a wonderful experience … and one that I would love to repeat (although not at Easter, ‘cos you’re supposed to be serious then). On the last day of the feria, two mayordomas were elected to organise Feria 2013 – one of them, Isabel Maria Hidalgo Gonzalez, was also an honourary mayordoma this year, and I’ve already told her I’ll be willing to help her out next year.

But I think I’m going to grow my hair…