More than 50 local and international dishes – from gazpacho to Teriyaki chicken to ‘Gypsy Arm’ – were waiting to be tasted by the villagers and tourists. The judges had just started scoring the desserts when the masses could no longer wait. Those with the longest arms got to eat the most.

GASTRONOMY AND TOURISM – A winning combination

WHILE  ten different Olympic sports were taking place on Friday, 10 August, our village of Montejaque had its own competition – a food-tasting in the plaza, with the top four dishes being declared as the ‘Menu of 2012’. The event was organised to launch the ‘Libro de Cocina y Guía del Pueblo’ (Cookbook and Village Guide) that I had produced, and which was going on sale for the first time.

Throughout the heat of the 45-degree afternoon, plates and bowls of food were arriving at the house of María Victoria Naranjo Hiraldo (my collaborator on the cookbook – who fortunately has a large house conveniently located on the plaza). Victoria was able to refrigerate all the cold dishes – particularly the gazpacho, which one friend jokingly suggested would otherwise be more like a minestrone than a chilled tomato soup.

The event kicked off with a speech by the Mayor, Diego Sánchez Sánchez, followed by a speech that Victoria and I had written; we took turns in reading this in Spanish and in English (for the benefit of the great number of English-speaking tourists in the crowd). During the speeches, the three judges were sampling all of the entries, which had been laid out in three sections: soups and entrees; meats; desserts. Alongside each dish was a tent card with the contributor’s name, the name of the recipe (in Spanish and English) and the page on which it appeared in the cookbook. It had been decided beforehand that the international dishes would be judged together with the local ones, and that the ‘Menu 2012’ could possibly incorporate one or more of the foreign recipes.

After marking the first two categories (27 dishes), the judges moved on to the desserts. The locals saw this as their opportunity to start in on the already-judged entries … but they moved faster than the three judges, who were still trying to decide on the merits of floating meringues as opposed to ‘Braza de Gitano’ (gypsy arm) when they were overwhelmed by villagers clutching plastic forks and waving plates. I am still not sure whether any of the desserts that began with the letter ‘N’ onwards (all dishes were set out in alphabetical order in category) were actually awarded a score. I only know that my ‘pastel de zanahorias’ (carrot cake – page 79 in the cookbook) didn’t even get an honourable mention! 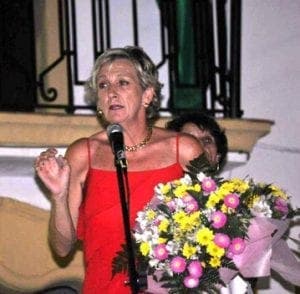 After the speeches, Victoria and I (ably assisted by our husbands, Miguel and Kevin) started selling the cookbook and village guide. My ‘regalo’ (gift) to the village residents was that they could buy one book for only 3€ (basically the printing cost per copy – the RRSP is 10€). One copy per address was the limit … and I quickly discovered that the bun-fight over the food was repeated during the cookbook sales.

“I am taking five copies at 3€,” declared one resident: “One for me and four for my neighbours.”

Perhaps five minutes’ later, another resident would say the same thing … and poor Miguel was trying to record the 3€-per-address sales as a huge queue formed, and villagers were waving euro bank-notes in the same manner as they’d waved plastic plates and forks 10 minutes’ earlier.

I, meanwhile, was selling the 10€-per-copy books to the non-residents … and was also being called upon to sign copies of the cookbook and village guide, briefly making me feel like I was J.K. Rowling (wish I had her money).

All of the proceeds from the sale of the book will go towards a yet-to-be-determined social project in the village of Montejaque. We are hoping for an ultimate profit of 5,000€, based on sales of 500 books at 10€. We have allocated 400 books at 3€ to village residents (with the 1,200€ thus raised to pay the balance of the printing costs), and one hundred books of the 1,000 print-run are for promotional purposes.

Sales went well on the Friday evening: we sold 153 copies to residents and 41 to visitors, taking in a total of 869€. We are nearly at our ‘break-even’ point to pay off the balance to the printer; sales after that are pure profit.

If you cannot come to Montejaque to purchase your copy, we can make arrangements to post it … we have opened a bank account dedicated to the book, as well as created a Gmail account: cookbook.villageguide@gmail.com. Please send an email enquiry about the cost of sending it to your part of the world.

And the winning dishes, comprising the ‘Menu 2012’ – and to be featured on the menu at the Hotel Montejaque later this month – are as follows: