And yesterday the butcher-ess learned all the English expletives at once when she heaved my turkey onto the scale. Nine kilos. Twenty two pounds. A big turkey, I could’ve dealt with that.

It was the bumpy scaly legs, the gnarled claws, and the coarse white feathers still sticking from the wings that caused me to curse repetitively. The panic of having to clean, carry and cook the Doberman sized bird set in as my eyes tried to take it all in. “Y la cabeza?”, she nonchalantly asks, barehandedly hauling it to the other side of the counter. The white and wrinkly limp neck swings around and exposes the club on the end, eyes and beak right where they should be.

This is one of those ‘cultural differences’ moments I tell myself. The other Spaniards in the shop roll their eyes as I make a scene, describing an American turkey to my Spanish audience, “little bird, comes on ice, no head, no legs, very nice.” I guess Butterball doesn’t translated directly. My roommates’ and my panic-painted shock and obvious ignorance helped our case. The butcher gave us half of a turkey instead, which came in from the less intimidating corner at a calming ten pounds. We invited the entire staff of the carnecería to our Thanksgiving meal and hurried home to start cooking, a bloody turkey bone protruding from our plastic bag as we walked down main street. The humor of the experience carried us through the next couple of hours until basting time. After ninety minutes in the tried and true oven, Daisy (christened by my roommate) was just barely warm. Thanksgiving panic resumed! This time with an American, Canadian, English, and four Spanish friends eating appetizers in our living room. I quickly recalled the method I’ve seen my mother’s cooking group use when ovens fail: knock to the neighbors. Carmen and Antonio, in all their seventy something years of glory, came to the rescue and cooked the hell out of our Daisy bird. Bruschetta from my Italian friend from Jersey, mashed potatoes by Irish Rebecca, and the group’s reviewing of Spanish and English cuss words kept us all content until we cheers-ed over a dry but beautiful turkey at 11 o’clock.

I introduced my family tradition of going around the table saying what we are thankful for. I was so thankful to share my favorite holiday with new cultures (our table had more Thanksgiving virgins than vets). I think Rachel from New York said it best: “I am so thankful to feel so at home, so far away from home.”

Laughter, good company and the sharing of traditions at the expat Thanksgiving in Baza assuaged my holiday homesickness. 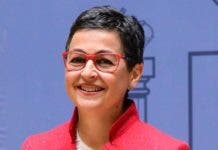