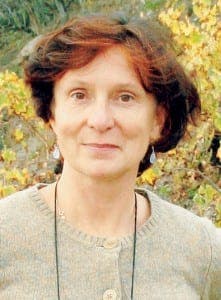 “EVERYONE wants their own house with a beautiful view but people need to think about the environment.”

So begins my lesson on the damaging effects of erosion to be found all across Andalucia, courtesy of landscape architect Margo Planthof.

The 51-year-old Dutch woman specialises in ‘interventions’ designed to drive back erosion, something of vital importance to Andalucia and  particularly in the Axarquia, where she lives.

“The problem is getting worse every year,” she explains. “Every time a new house goes up it has an accumulative effect.

“One house on its own won’t do much damage but the sheer numbers we have seen over the last few decades has proved devastating and sadly builders and architects aren’t thinking enough about it.”

She certainly has a point. According to the Malaga Sustainability Report, erosion is the main problem facing sustainability in Malaga and it is affecting as much as 45 per cent of the province.

Between 1997 and 2007 more than 10,000 hectares of agricultural land and forestry  – the equivalent of 881 football fields – was lost due largely ‘to the massive building on the coast,’ according to the report.

Environment boss Miguel Esteban Martin confirmed that Malaga was suffering ‘a huge hangover’ from the tourism and construction sector, and would ‘inevitably have to move towards a sustainable model.’

The problem is that cutting down trees and building on steep slopes – when coupled with low rainfall and an over-cultivation of olive groves – has led to an increase of erosion, and worse, desertification.

Without the natural matt of weeds and foliage acting as a sponge in times of rain and as an anchor against wind, the soil becomes hard and cracked.

Then as heavy rain flows downward the soil is torn away from the ground forming mudslides that scrape the soil still further.

The hilly character of Andalucia – which is the most affected region in Spain – only accentuates this double process of erosion.

“But it is made even worse when people cut out part of the slope so that what was a gradual slope becomes a sharp drop and the water runs even faster without having time to soak into the earth,” explains Planthof.

“This means the water that should be feeding the plants isn’t being absorbed and the land is drier and is easier to burn when there are forest fires.

“Plus the loose earth ends up at the bottom of the slope in a river or stream and clogs it up,” adds Planthof.

“The fish don’t like this and the things that used to grow don’t anymore.”

But all is not lost.

Planthof is particularly keen to emphasise that there are solutions to the problem.

“It is never too late,” says Planthof, who has lived in Spain on and off since 1982. “Damage can always be repaired. But first, we have to face up to it.

“A lot of people simply don’t talk about the problem in case it affects house prices.

“And they only see the damage to their own property, they don’t see the big picture and they have no idea of the causes,” she laments.

“If a house is affected by a landslide, the owners just get a builder to clean up but they don’t solve the problem which can be difficult and costly.

“If you really want to stop it you need to consider the whole slope from top to bottom.

“It is a chain and the solution is a matter of cooperation. Of course individuals can also make their own contribution.”

Indeed, there are several techniques that can essentially halt the phenomenon of erosion, allowing the ground to become firmer to better tolerate the impact of heavy rainfall.

“Oak trees have strong roots and can stabilise the earth which is a good place to start,” suggests Planthof.

“You can also stabilise an area with heavy rocks. And planting a layer of low vegetation such as grass is also one of the most effective methods to combat erosion.”

Lorraine Cavanagh, owner of the Viveros Florena garden centre in Competa, also has some suggestions for plants that can help deal with the problems.

The author of the book Mediterranean Garden Plants, explains: “We get a lot of people looking for solutions, and the problem has become especially apparent after the heavy rain of the last two winters.”

“Generally you need plants that hold the soil together. Good ones to use are creeping rosemary, lantana and creeping myoporum.

“And a lot of shrubbery can help – really anything that can cover the ground and break the force of the rain.

“Alternatively, you can use trees with spreading roots like the false pepper tree.”

Meanwhile, Planthof is not alone in fighting the problem.

Indeed, the olive oil industry is starting to look at conservation measures to combat erosion which is the biggest environmental problem facing the industry after climate change.

According to biologist Manuel Ruiz, who coordinated a workshop in Jaen in March, an estimated 80 tons of soil per hectare is being lost each year due to the erosion in Andalucia.

“That’s equivalent to about four truckloads of soil for every 100 olive trees,” he says, adding “it requires above all a change of mentality — to take erosion seriously and change some habits.”

This is certainly a mantra followed by Planthof.

“It is good the problem is starting to be taken seriously and is attracting attention,” she says. “Andalucia is one of the worst affected regions in all of Europe and people need to start dealing with it.”

Failing that and the slow steady creep of the Sahara desert will continue marching apace.