TO say the odds were stacked against me is somewhat of an understatement.

However, being the eternal optimist and having perfected the art of patience during three years camping in Patagonia where I went in search of the elusive Patagonian Puma, I felt lucky.

This time my destination was the Sierra de Andujar a short drive east of Cordoba where one of the last viable breeding populations of wild Iberian Lynx (lynx pardina) clings to its fragile existence.

Since moving to Andalucia in 2003 it was my first attempt to locate the lynx, and I was under no illusion as to the difficulty of the task I had set myself.

Little did I know, what lay in store for me was beyond my wildest expectations.

I arrived at the Los Pinos hotel on the fringes of the natural park, which acts as the unofficial base for the majority of lynx spotters that come from all over Europe and further afield, to catch a glimpse of the world’s most endangered cat.

I was one of maybe 25 people, most of them armed to the teeth with the latest array of expensive spotting scopes and binoculars, silently scanning the valley and surrounding hills.

The first day however passed without incident, as did the following three.

And as the last day dawned, I prayed it would yield a result. 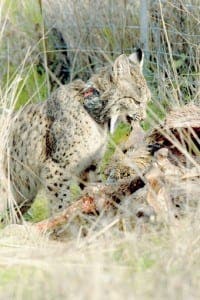 The routine stayed the same, with the odd flurry of conversation breaking the silence, until suddenly around 2.30 the air was filled with the crackle of active two way radios and it soon became apparent someone had spotted a lynx.

I arrived at the group and a fellow spotter pointed to an array of granite boulders located near the crest of a hill. I quickly spotted the lynx sitting on a boulder soaking up the heat of the sun. But I suddenly realized my huge 600mm Nikon lens, the 1.4x converter and attached camera were tucked up in the camera bag on the front seat of the van.

Frantically running I grabbed it and clamped it all in place, in time to watch the hind legs and stubby tail disappear from the boulder into the undergrowth.

Words cannot express how angry I was with myself at missing an opportunity like that.

But a couple of hours later another, or possibly the same, cat was sighted crossing a rocky slope before disappearing into the next valley.

I had no images but I had seen two wild lynx on my first visit, so I was luckier than most.

I decided to head off, driving at walking pace to increase my chances of a last minute sighting.

I passed near a collection of moss and lichen covered boulders where two days earlier I had seen a dozen or more Griffon and one Black Vulture resting.

As I approached I saw no sign of vultures, but as I was just about to drive off a movement caught my left eye, I pulled over and looked left and to my amazement walking straight towards me with a GPS tracking collar around its neck was a lynx.

I watched as it slipped down the rain gully on the far side of the narrow road under a wire fence.

I slowly approached the spot where an adult hind red deer, its head and neck firmly wedged between the lower runs of the wire fence, lay half eaten.

To my delight the lynx was sitting next to it chewing away on a section of the exposed ribcage, not showing the slightest bit of concern at my intrusion.

I began snapping away in a sense of heightened shock at what I was witnessing. 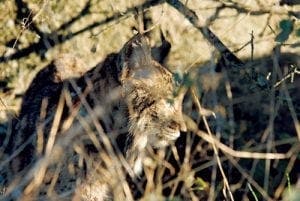 Earlier that day a hardcore lynx spotter told me he knew a guy who had made 15 visits to the park and never spotted a lynx, and here I was on my first visit, having seen two within a couple of hours, and now I was watching a third within spitting distance, feasting on a deer carcass.

The lynx then moved under the fence and headed for the shade of a small tree growing in the ditch on the far side of the road.

I followed and was amazed to see it lay down next to the narrow trunk and close its eyes. I wanted to get as many images as possible so I got down on my belly in the ditch and crawled until I was able to see into the grass and hanging branches of the tree.

I could make out the hind quarters and stubby tail, but its head was behind the trunk, until half a head slowly peered out from behind the trunk, its visible eye wearing a piercing glint, caused by the low fading light.

The improbability of the situation I found myself in kept racing through my mind. Here I was lying in a muddy ditch by the side of the road pointing a camera at one of the surviving number of the worlds rarest species of wild cats, which only moments before I had observed feasting on the carcass of a deer.

I took the shot and watched as it moved back behind the trunk. I moved out into the road where I noticed it had closed its eyes, seemingly dozing off after its recent meal.

It was time for me to go.