“THERE you go look, they’re smugglers over there, you can spot them a mile off.”

The Gibraltar Defence Police (GDP) officer is pointing in the direction of a small group of youths on mopeds huddled round conspicuously, in full view of the Gibraltar frontier.

In the UK they might be referred to as ‘hoodies’ – their hooded sweat tops pulled tightly over their heads giving a distinct sense of menace.

Here, they are known simply as ‘smugglers,’  a word synonymous with this border for centuries.

“They come back and forth over the border several times a day taking cartons of cigarettes into Spain,” adds the officer, who is speaking on condition of anonymity.

“They send a different person each time, or they just wait for the shift change to avoid detection, they have it down to a fine art,” he adds, with an accepting sigh.

“In my opinion we are woefully under resourced and have little chance of stopping it.”

And so it seems, during a morning spent quietly observing the comings and goings at the various tobacconists along Winston Churchill Avenue.

A clear pattern emerges as shady looking characters loiter at the side of the road apparently passing the time of day before a moped pulls up from the direction of the Rock and hands over black bags clearly containing cartons of 200 cigarettes.

After pausing only briefly, the moped rider turns round and heads back over the runway while the receiver sets off for the border.

When I ask one man who has just received a carton where I can sell tobacco in the border town of La Linea, he smiles slyly and says he doesn’t know.

‘The cigarettes are just for me,’ he sneers.

Following another group of three individuals over the frontier on foot, I watch as they regroup on the Spanish side.

Moments later, a silver hatchback with tinted windows pulls up, at which point the group pass their collective haul in bags through the window before the car speeds off, melting into the traffic.

It is completely brazen. 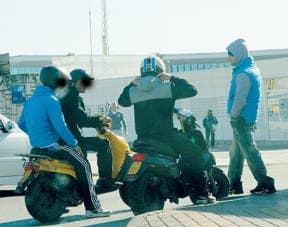 When I ask a kiosk owner in La Linea what he knows about smuggling and whether he has ever been offered tobacco to buy, he just shrugs and says he knows nothing about it.

Tobacco smuggling is a big problem in Gibraltar, with organised gangs reselling the Rock’s duty-free cigarettes for a profit, over the border in Spain and further afield.

Legally, you are allowed to take a maximum of one carton of 200 cigarettes across the border from Gibraltar into Spain each month.

In reality however, scores of people are smuggling across their annual allowance in the space of a day, motivated by the prospect of making a profit of three or four euros from each carton.

The issue is not a new one in Gibraltar.

In the past, gangs would go almost completely unchallenged as they transported vast quantities of tobacco to Spain using small boats.

“Kids were coming out of school and going straight onto the launches.

“There were so many young people with Mercs and gold chains, it was all very blatant.”

Pressure from London and Madrid eventually forced the government to act, controversially confiscating all launches, leading to riots.

But although the smuggling may have been on a grander scale in the past, there has been a noticeable rise in recent years, blamed largely on the economic crisis and the chronic unemployment engulfing Spain.

Figures obtained by the Olive Press from the Spanish National Tax Agency (AEAT) show an alarming year-on-year rise in the recent past.

Incredibly, three times as many people have been caught this year than in 2008.

“I sympathise with the people doing it,” the GDP officer explains.

“These are tough economic times and smuggling can be the difference between putting food on the table for their children, so I don’t blame them for doing what they do.

“You can tell the difference between those who are smuggling for luxury and those doing it out of necessity, and a carton of cigarettes is not for luxury.

“If I catch a guy, am I stopping him from feeding his children? The fewer cases we get called to, the better, as far as I’m concerned.”

The large number of tobacconists’ in Gibraltar’s Irish Town appear to share his pity.

“There has always been smuggling and it’s only tobacco so it’s not so serious.

“In fact maybe only five per cent of those doing it are bad people,” reasons 45-year-old Annabelle Luque, who has run a tobacconist for several years.

“Besides, the customs officers aren’t stupid, they know who the proper smugglers are.”

Francis Gonzalez, 39, agrees: “You have to understand these people have to eat.

“If they can’t survive on this type of crime then they will resort to more serious offences.

“And it has certainly got worse in the last couple of years since the economy went downhill.”

At the same time new restrictions have been introduced in a bid to stem the tide.

Retailers are now restricted to selling a maximum of five cartons (1,000 cigarettes) to an individual in any one transaction. 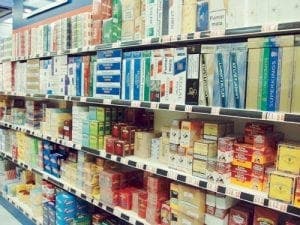 However, the smugglers attempt to exploit loopholes in the system, which in theory allow the same individual to return an hour or so later and buy another five cartons from the same retailer.

“We do get some individuals who can be a bit of a nuisance,” Luque adds.

“But the police are very vigilant now so you have to be more careful about who you are selling to.”

The authorities have sought to clamp down on this practice by imposing a £500 fine on tobacconists caught selling more than the legal limit to individuals.

But beyond the sale restrictions, the retailers are largely disinterested in where the cigarettes end up.

As the manager of one tobacconist near the border puts it: “I don’t care, my job is to sell tobacco.”

Despite the sympathy towards the economic situation of the smugglers, not everybody buys into the idea that they are simply loveable rogues trying to make ends meet.

“A lot of the tobacco smuggled out of Gibraltar is done so on a large scale for commercial purposes and ends up in cities like Sevilla and Granada or further afield,” warns one Spanish police officer.

“Smuggling has been going on since the 1800s so it will be hard to stop it now.”

So what exactly is being done to combat the problem?

The Spanish response has been to increase the number of checks on mopeds leaving Gibraltar, but this has led to complaints that the huge delays caused by the stops are affecting hundreds of innocent people.

The issue has even been discussed by the European Commission after question marks were raised about the legality of the checks, although the Spanish were found to have been acting within the law.

Gibraltar meanwhile passed legislation in September allowing the resale of seized tobacco to licensed wholesalers at auction in a bid to raise much needed revenue.

Previously the seized tobacco was destroyed, but now that money will be used to fund the fight against smuggling.

A Gibraltar government source told the Olive Press that the issue of smuggling is a very complex and controversial one.

“The Spanish side sometimes let things go because of the chronic unemployment.

“But that’s nothing to do with us, what can you do? Some tobacconists have had their licenses taken off them recently but the problem is not too rampant, Gibraltar is such a small place that it is easy to control.”

The line between the good guys and the bad guys is clearly a very blurred one, with many hinting at a belief that tobacco smuggling is a victimless crime.

And for as long as the solution remains the subject of so much conjecture, the only certainty is that tobacco smuggling seems destined to remain the elephant on the Rock.

Cristina Hodgson - 21 May, 2022 @ 10:30
SPANISH chef Jose Andres has taken his NGO to provide hot food to refugees who have fled the Russian invasion. Andres, however, needs volunteers to...