FRIENDS with kids have been talking about Zoo de Castellar non-stop and exclaiming how wonderful it is. But I hadn’t really taken it in until I saw my friend Nicola’s pictures. She was cuddling a real live tiger cub! That was it, I had to go!

So last Sunday we bundled into our car with a couple of friends (we couldn’t find any kids to borrow). Castellar de la Frontera is located inland between Sotogrande and San Roque, not far from Sotogrande International School. As we approached the village we saw brown signs showing the way to the zoo, and then we sort of arrived there! 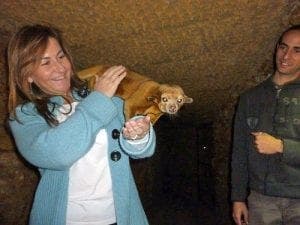 Well, we weren’t entirely sure. There were folk abandoning their cars left, right and centre but we pushed on to the entrance. There we found a very helpful English guy directing the traffic and pointing out parking spaces (and hazards!) in the somewhat ramshackle park areas. To this day, we’re not sure if he worked there or was just being helpful as we saw no other English zoo employees! He was dressed in khaki coloured clothes so you can see why we may have mistaken a poor civilian for a zoo employee. At least I didn’t tip him!

So already you must be getting the picture that Zoo de Castellar isn’t your average zoo!

Castellar Zoo is a rescue centre for all sorts of animals which have been seized by customs or police. It started as a private sanctuary back in 1998 and finally opened to the public in 2002, aiming to raise extra funds to care for the animals, while increasing awareness and educating visitors about the zoo’s wonderful residents.

Unfortunately many of the animals taken in by Castellar Zoo have had a very bad start in life. Some have been seized from smugglers attempting to move them across borders in tiny boxes or cages, and others rescued from circus troops. Some were exotic pets being traded on the black market while others are slightly more domestic species.

We met emus, tigers, Vietnamese pigs, guinea pigs, rabbits, vultures, a hyena and lots of monkeys. But it was heart-wrenching to meet Vagabundo and Indi, a Bengali tiger cub and lion cub who were in a really bad way. They had been rescued from a Moroccan circus caravan suffering from malnutrition. They had open wounds, severe hair loss and damaged eyes. After this horrible start in life, followed by many days cooped up in quarantine, they are finally being well looked after by the zoo staff and being given a second chance at life. 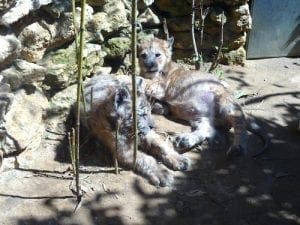 The zoo is constantly working to upgrade its installations for the sake of the animals and to make it an even more exciting visitor attraction. Some facilities are a bit basic and more cautious parents may find the proximity to some of the animals just too much. We had a wonderful time and found it funny that the crocodile tank was leaking into the cafeteria but I understand that not everyone will find the humour! And I’m not sure all parents will be quite as laid back as those we saw letting their children climb in with the Vietnamese pigs. I have to say, the pigs didn’t seem too bothered!

Zoo de Castellar is a charming family zoo. It’s back to basics and hugely interactive. There’s very little technology but children (even the 46-year-old kids) can feed some of the animals with seeds bought from reception for €1. For me, the first highlight was having a very cute honey bear (looks nothing like a bear) wind its tail around my neck. But that experience was soon overshadowed when I met Princesa, the beautiful three month old tiger who was having a wild time playing with all the visitors.

Zoo de Castellar receives no government assistance and survives on donations, sponsorship and entrance fees. It is open everyday from 10am to dusk during the peak summer season, and just on Saturdays and Sundays the rest of the year. Check out www.zoodecastellar.com for more information and prepare your family for a day out with a difference.

No rush for resolutions