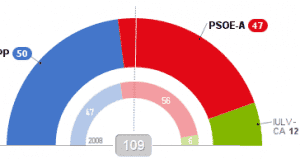 IN a shock result in the Andalucian regional elections Jose Antonio Grinan will remain president of the Junta, despite losing.

The rival Partido Popular actually won the regional election for the first time in its history, but was short of the absolute majority leaving PSOE and the IU able to team up to take control of the Junta.

PP candidate Javier Arenas said: ‘We are going to behave as what we are, the largest political force in Andalucia.’

However Grinan insisted he was going to put every effort into having a ‘stable’ government over the next four years.

“We have recovered the support we lost in the general elections and turned around in the polls.”

Many people have been left shocked however by the result especially as the polls in the weeks leading up to the election had predicted a clear victory for Arenas.

Following the ERE scandal support for PSOE reached an all time low and in the general election four months ago the PP had an advantage of 400,000 in the number of votes with a 9 per cent lead.

The PP won in Cadiz and Malaga but only by a single seat, with their best province being Almeria where they obtained seven seats compared to the socialist’s four.

In Sevilla the PSOE kept their two seat advantage.

It was also successful night for the IU which obtained 110,000 votes more than in 2008 and managed to double its seats to 12.

Meanwhile, in Asturias the PP lost the election but will be able to govern with Foro.

A statement from the party headquarters spoke of ‘surprise and disappointment’ and admitted the results in Andalucia and Asturias were lower than expected.