I DON’T know about you but one of the things I love most about Spain is the food, and more specifically tortilla de patatas.

I know it is severely lacking in your five-a-day (heaven forbid) and a bit carby, but eggs are good for you, right? (The BBC says yes.) Anyway, tortilla de patatas is incredible; an institution, so enjoyable and a stable part of my diet.

The Mesón de la Tortilla on calle de la Navarrería in Pamplona is, as you’d expect, full of a large variety of different tortillas. Their menu changes with seasonal variations and specialities, so twice, maybe thrice, weekly visits are necessary. On the menu there is local chorizo, tuna and sweet red pepper, asparagus, spinach and soft cheese (my favourite), ham and cheese, tomato and cheese, and wild mushrooms – all set in thick wheels of eggs and potato. There’s even the Navarra speciality, two tortillas put together in a sandwich around a filling. Delicious. 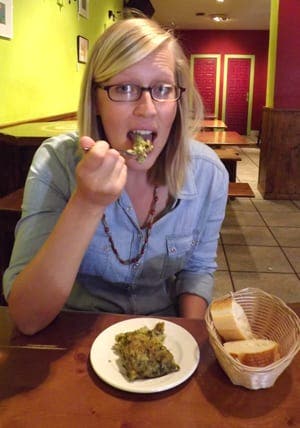 You’ll be returning to the Mesón de la Tortilla time and time again with its heavy wooden tables and tall charming Basque staff recognisable by their coconut shell earrings, dark beards and the occasional dreaded strand of hair. Greet them with a friendly Basque kaixo, pronounced “kyshow”. Goodbye is agur (“agoor”). They’ll be impressed.

You can accompany your pintxo of tortilla with a caña (beer), the bread basket and a perusing of the local newspaper. Or you can head outside and sit in the plaza, perching your tortilla on your knees by the fountain la fuente de la Navarrería, also known as la fuente Santa Cecilia. You will have heard of this one. It’s the famous fountain that crazy Australians (I’ve been told it’s mainly Australians, but perhaps this term is applied liberally to all tourists, much like “gringo” is in Latin America) throw themselves off of during the San Fermin festival. Unfortunately, the over-zealous ‘Australians’ ought to notice that the locals just don’t do that, they’re too busy preparing for the encierro, the running of the bulls; the real adrenaline rush. The locals soon lose patience with the Aussies’ incessant need for crowd surfing. Every year people get seriously injured after jumping and, well, not surfing. Furthermore, every year there are ‘Australians’ running around with tickets for the ultimate fountain experience. Cunning tourist-baiters sell tickets to these naive and inebriated foreigners. This is not an event. There are no tickets.

It’s not unusual to find me in the Mesón de la Tortilla or one of the many other establishments enjoying a pintxo of tortilla. However, I have been assured that restaurant tortilla no tiene nada que ver with a home-cooked tortilla. Even the famous tortilla chef Senén González said the best tortilla is always your mother’s. Charismatic Senén is fromVitoria in the Basque Country. He won the annual tortilla de patata championship in Alicantein 2010. He has recently developed a way “to share his tortilla with the world” in the form of a frozen tortilla in expensive plastic wrappings. I have my reservations.

I would not describe cooking as one of my strengths. My homemade attempts at cooking tortilla have effortlessly and consistently turned into scrambled eggs. After recounting my woes to my adoptive Spanish abuela, Ana, and doing hours of research on youtube, I felt inspired to give it another go. These are the basics I picked up:

Three attempts and many eggs later, the love affair with tortilla was only slightly marred by a frying pan lacking in vital non-stick. Next challenge: the local tortilla de patatas competition, open entry, category: comedy.

Dilip Kuner - 23 Jan, 2022 @ 15:01
WITH land at a premium, the Gibraltar government has been pinning its hopes on reclamation schemes to provide desperately needed building plots. This has not...