ENVIRONMENTALISTS are outraged over plans to build a massive hotel and housing complex on one of Europe’s last virgin beaches.

The scheme, which has now been given the green light by Tarifa Town Hall, will affect a staggering 700,000 square metres of dunes – the equivalent of 700 football pitches – on the unspoilt Playa de Valdevaqueros.

The 84,000 square metre urban development, which is being promoted by GMT and architect Juan Munoz, aims to create 1,423 hotel places and 350 homes on the unspoilt coastline.

“There is still much that can be done to avoid bricking over the unspoilt Valdevaqueros beach,” said EQUO spokesman Juan Jose Lopez Uralde, who insisted the town hall’s decision was ‘bad news’ but that ‘it was not over’.

“The brick economy has led us into the pit where we are now; the same recipes are not going to help us get out of it.

“The town remains committed to economic and development models which have failed in practice and only contribute to enriching the few while destroying the heritage of all.”

Meanwhile over 8,000 people have now joined a Facebook group (www.facebook.com/SalvemosValdevaquerostarifa) protesting against the decision.

But the PP Mayor of Tarifa, Juan Andres Gil, continues to defend the project and has accused the protestors of damaging the local economy. 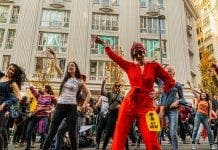