GROWING up, there was one place in Europe that I knew I could always get away from it all and enjoy pretty-much guaranteed sun.

Cabo de Gata is one of Spain’s last remaining coastal regions not yet sacrificed to developers and consumerism.

Conjuring up a true sense of wilderness, it is no surprise that many a Western film was shot here, nor that Garcia Lorca’s tragedy Blood Wedding, was based on a true story set at the now-ruined atmospheric Cortijo de los Frailes.

Rolling hills of elephant grass, pock-marked with lines of agave and low-rise, flat roofed white farmhouses, this is a photographer or film-maker’s dream.

The walks are wonderful, either inland, or along the undulating coastline, and the mix of restaurants and hotels excellent.

But most of you are probably interested in the beaches and there are few places in the world that can compete with Playa de los Genoveses, Playa de los Muertos, or La Cala de San Pedro, which until recently could only be reached via a stiff hour-long stroll from Las Negras. 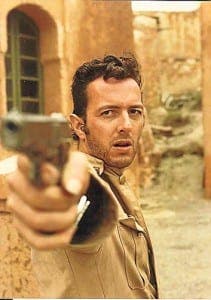 While Genoveses is part naturist on one side, it is the perfect family beach, as long as the kids don’t mind a short walk across the dunes.

For those looking for something more convenient, hole up in Agua Amarga, often thought to be one of Spain’s most exclusive resorts, albeit in the most low-key sort of way.

It was here where the film Sexy Beast was shot and where Spain’s leading captains of industry come to unwind.

We spent five days at Christmas here and literally had the beach to ourselves.

But what nailed the area for me was when I interviewed former Clash lead singer Joe Strummer, who told me he had a home in San Jose and visited frequently.

As the owner of local restaurant La Gallineta explained: “Joe tipified the kind of visitors we get to the region. He was fun, thoughtful and intelligent.

“He spoke Spanish and would always turn up at my restaurant shouting for a Mojito with a big smile on his face.

“We gave him the nickname ‘Mojito Joe’ and were all devastated when he passed away so young.”

There is no way Joe went Straight to Hell, to coin the name of a film he starred in and shot in Cabo de Gata in the 1980s.