BRITISH diving sensation Tom Daley is heading a campaign against a perilous craze which has already killed three Brits and a German in Spain this summer.

The deadly practice of ‘balconing’, as it has become known, involves crossing between balconies – or sometimes even attempting to reach the hotel pool from the balcony.

As reported in the Olive Press in summer 2010, balconing is most often carried out by youngsters on holiday – often in the early hours of the morning while drunk.

In April this year, 28-year-old Londoner Benjamin Harper suffered a fatal fall from a fifth-floor balcony in Mallorca, while in May Charlotte Faris, 23, from Hertfordshire, died after falling from a third-floor balcony.

In June, a 19-year-old German tourist died in Lloret de Mar after trying to jump between seventh floor balconies in the middle of the night.

In all cases alcohol plays a huge part.

Now 18-year-old Daley, a world champion diver who was Britain’s youngest competitor in the 2008 Olympics, is helping warn against the dangers of balconing.

Launched by the British consul for the Balearics, Paul Abrey, the campaign will run throughout summer in the bars and clubs of Ibiza, Menorca and Mallorca.

And Daley’s message is clear, telling tourists to ‘leave the jumping to the professionals’.

He continues: “Never jump from a balcony and never drink or take drugs before swimming.” 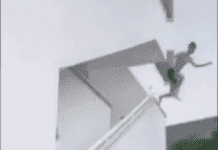 WATCH: Brit claim that he ‘slipped’ by pool to recover 37,000 euro hospital bill in Mallorca FAILS after video shows him jumping into a... 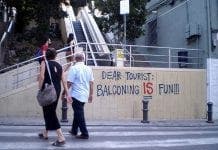 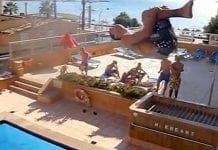