WITH a quarter of the population out of work, Spain – officially at least – leads the developed world for unemployment statistics.

It has been the case for four years and the current crop of supposed ‘jobseekers’ currently stands at a shade over five million people – or a staggering 24.4 per cent of the workforce.

The good – and bad – news is that the data is only based on the number of people who register for unemployment benefits.

The fact is that many people in Spain collect a pay cheque while still claiming dole.

It is actually endemic and results from weak controls and penalties, as well as high labour charges… and some people believe it could number half a million or more.

“Clearly, with so much underground economic activity, all the official figures are false,” says Javier Diaz-Gimenez, economist at IESE Business School in Barcelona.

“In this country people show off about dodging taxes. The consequences of that level of tolerance to fraud are devastating for the economy.”

Of course no one who lives in Spain would deny the crisis has had a profound impact on the country and is leaving the economy on the brink of collapse.

Daily headlines scream about families being evicted as they cannot pay the mortgage, people whose benefits have expired and can no longer put food on the table and young people who have graduated but never find work.

These stories are not made up or exaggerated.

The majority of people who live here know someone that fits into at least one of those categories.

However, in spite of this, it is taken for granted that the official unemployment figures are well wide of the mark.

The real figures of course are difficult to ascertain and opinion is always skewed by perspective of the people you know, and whether they are working or not.

But it has been estimated that the whole underground economy could make up as much as 20 per cent of the country’s Gross Domestic Product (GDP). In Andalucia this figure is bound to be much higher.

“A quarter of all work is off the books,” claims fellow economist Jose Ramon Pin, who estimates that at least 400,000 out of the three million people eligible for benefit are working illegally.

“The government doesn’t get any tax revenue from these people, because they’re theoretically out of work.

“And worse than that we are paying them unemployment benefit,” he adds.

However, working cash-in-hand or dodging taxes (depending on which way you look at it) is a safety net for millions in hard times.

In Andalucia, in particular, ask anyone and they will tot up – albeit in a hushed voice – the amount of friends and relatives who are earning cash from construction jobs, cleaning jobs and gardening jobs. The list goes on and on and includes nurses, barmen, and even teachers.

“It seems to be partly a structural issue in the way the employment laws operate. 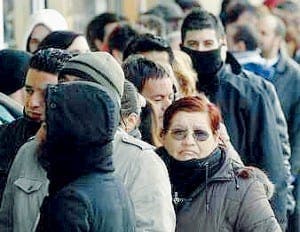 Often the pull towards the black economy stems from the fact some people quite simply cannot afford to be officially employed.

“It is just too expensive,” a cleaner, who works without a contract, told the Olive Press.

“Almost everyone I know who is officially unemployed is working at least part time. It is one of those things that everybody does.

“I am not entitled to receive unemployment benefit so I have to work. But if I was on a contract or self-employed I would have to pay so much in social security it wouldn’t be worth it.

“At the moment I pay €80 a month for private insurance which covers my health care and pension. I have had it for five years but I would lose everything I have built up if I went on a contract now.”

To be self-employed (or autonomo) you must pay a minimum social security payment each month in the region of €225 regardless of your earnings.

According to economist Diaz-Gimenez this is an example of the failure of legislation to reflect the needs of the workforce.

“It is a snapshot of reality; people need labour flexibility but the only way to get it is by flouting the law,” he said.

An English teacher living in Spain and working illegally agrees.

“It is a ludicrous system that is completely lacking in common sense,” she told the Olive Press.

“It seems so obvious that it shouldn’t cost the same amount as you earn to become legal, no one is going to pay that. If the law does not change, it is no surprise that the black economy is so big.

“The government doesn’t offer any encouragement, and I think most people working illegally only earn a little amount so they think it doesn’t matter.”

Of course it is not only workers taking advantage of the system but employers as well, who either choose not to put workers on a contract, or who pay part of the salary legally with the remainder paid under the table in a bid to reduce the tax bill.

Certainly in times of crisis this problem is worsened as employers feel they can get away with it because workers are terrified of losing their jobs, aware that if they refuse the terms there is a queue of people willing to work illegally.

Those most affected are often low-paid and low-skilled workers, with many unaware of their rights, leaving them vulnerable to unfair treatment by rogue employers.

Some of the worst abuse is by wealthy landowners, who actually charge people to buy so-called peonadas or ‘days work’ in order for them to qualify for agricultural assistance, or ‘PER’.

“These can often cost €20 to €30 each and people need 35 to qualify right now,” said autonomo-paying masseur Antonio Coca, based in Arriate. “It is a sick system and is being abused by hundreds in my village alone.”

The cleaner confirms this. “There is a lot of abuse that goes on,” she added. “Employers make people work long hours, for low pay. But the Andalucians are very proud. They would rather not work at all than be abused.

“They want a good contract, and employers are often reluctant.

“But it is not because Spaniards don’t want to work.”

This is an issue that came to a head in Huelva this year, when hundreds of unemployed people gathered in Almonte to complain that all the strawberry picking jobs were going to immigrants.

Protesters demanded that companies give priority to the 6,000 unemployed locals who are struggling to find work.

“We have had enough of seeing buses with immigrants arriving for the strawberry season. When we go to the finca to ask for a job they tell us they don’t want a Spaniard,” said a spokesman.

He added that the companies only want to hire immigrants who are cheaper and who ‘don’t know the laws’. 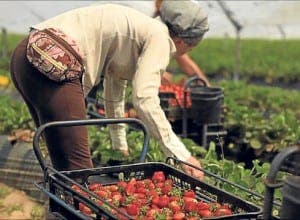 This however stands in contrast with comments made by Manuel Martinez the president of agricultural union Asaja in Cartagena, who controversially claimed that despite the five million people unemployed ‘no Spaniard wants to work in the countryside’.

“Only the immigrants want to work in agriculture,” he said.

This may well have been the case in the past, but now Spaniards seem more willing to try their hand at anything.

The problem is, the wages being offered are often less than what they are prepared to work for.

It leads to the ridiculous situation where large numbers of Andalucians – as was the case in the 1960s and 1970s – are actually leaving towns like Almonte to take fruit-picking jobs in France or Germany.

As one woman, from Alcala del Valle, leaving for France with her husband, this week explained.

“I am being forced to leave my five-year-old behind with his grandma and look for work abroad when there are jobs just five minutes away. It is crazy.”

Meanwhile the government, which is losing millions in tax revenues, is keen to crack down on the situation.

A raft of new measures are now being ushered in to attack ‘black unemployment’.

This includes employers who pay part of the wages officially with the rest under the table, people on part time contracts working full-time  hours and fake companies set up so that workers will benefit from being made unemployed.

“In my opinion this reform is not only necessary but vital to fight the enormous drain that the underground economy has on our country,” one blogger Aurelio Jimenez wrote on the internet.

The unemployment figures that loom large over the country’s ability to bounce back from the crisis do not tell the whole story.

There are very few who truly believe there are nearly five million people with no work at all.

The good news is that more people are working than it might seem which gives the government an important safety valve.

But, this is not to suggest that Spain is not struggling or that the figures should not be taken seriously.

The unemployment number broadcast to the world is undeniably important as to how the country’s current economic challenges are perceived by outside forces, and with confidence at an all time low, over-reporting the unemployment situation – perhaps by as much as five to nine per cent – could actually make things worse.

But until the government makes it affordable for the country to be legal, the dole queue shows no sign of getting shorter.